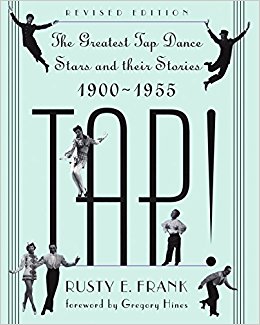 I have finally got around to writing this brief review, having finished reading this book back in July!

LA tap dancer Rusty E. Frank has compiled this fabulous book of interviews with all the tap dancing greats of the early to mid twentieth century as a potted history of tap. The book opens with a foreword by tap legend Gregory Hines (one of my faves!) who briefly describes the origins of the Jazz art form and the various styles and rhythms that evolved.

The book is then split into 3 parts:

Within each section, each chapter covers a different dancer, with some introductory blurb on the historical context of the era and what was happening on the dance and entertainment scene, followed by an autobiographical interview with the dancer. Being an American art form, you can’t ignore the fact that the book covers the era of segregation. The biggest example of this is the separate entertainment circuits of Vaudeville and the TOBA (the African-American version), minstrel shows, and the separate clubs, such as the famous gangster-owned Cotton Club which was for black entertainers and white audiences. There was some cross-over, but mostly for those who were able to “pass” as white, such as Leonard Reed…until he was found out.

It was interesting to read how each dancer had their own style within a style (flash, soft shoe, Buck & Wing, rhythm tap, acrobatic). Some were tapping from childhood, some fell into it and some came from classical dance backgrounds (e.g. Gene Kelly, Ann Miller), which clearly influenced their tap style. It was also amazing how many dancers learnt from, danced with, were influenced by or loved to compete with Bill Bojangles Robinson, the world’s greatest tap dancer. (It is said that he was a tap perfectionist who put hours and hours into his craft).

Helpfully, there is a glossary of terms at the end of the book, which I referred to regularly, followed by a series of Appendices covering all the tap acts, the years they were active and what they were known for, plus a list of tap in film and on record, which is also worth looking at.

Verdict: A fantastic snapshot of tap dance and entertainment through the Jazz Age, the War years and the post-war years, straight from the horse’s mouth, if you will. A MUST-HAVE for any tap dancer if you want to understand where it all began and how it developed. I’m really pleased tap dance is making a come-back 🙂