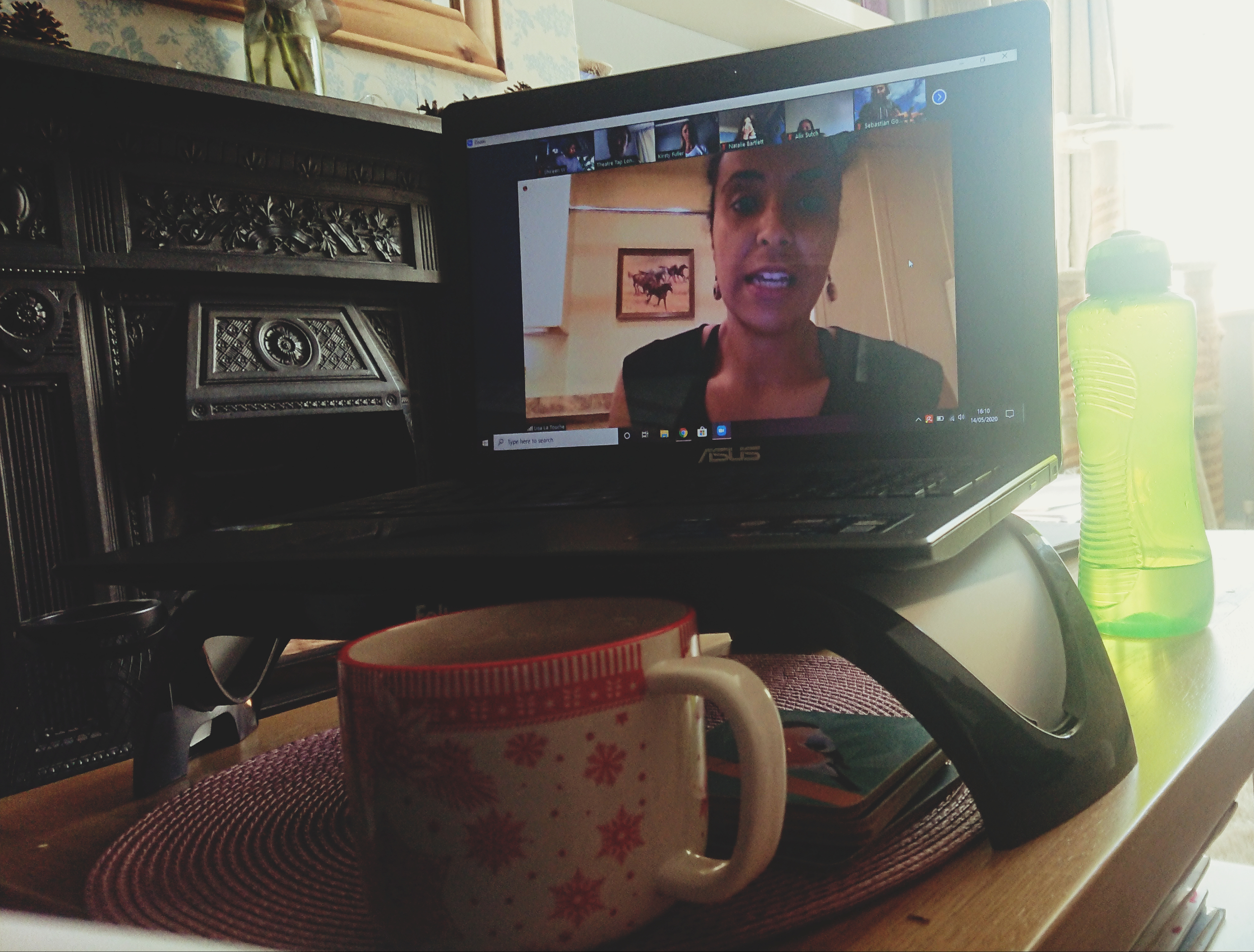 Last Thursday afternoon I had my online rhythm tap class with the aim of doing it in my garage which is all set up as a dance studio. The college is now hosting classes on Microsoft Teams, which is proving to be a challenge! On the previous week I was the only student who didn’t have a blank screen and was able to actually see our teacher’s demonstrations… and then this time, right at the start, Teams crashed out on my laptop and it refused to reconnect to the Internet, so I had to run in from the garage and grab a different device to join them again. I basically missed most of exercises before we tackled the routine – how frustrating! But at least I got back in before the end. I think I’ll stick with using the tablet for Teams stuff from now on. I just need to think about where I’m going to do these classes!

At 4pm I joined Theatre Tap London’s Tap & Tea session, with this week’s special guest, all the way from Calgary, Canada, Lisa La Touche! Lisa was a cast member of Shuffle Along (choreographed by Savion Glover), Stomp, and Sophisticated Ladies, among other amazing shows. She has won the Fred Astaire Award, the ACCA Actor’s Equity award, and was a member of Jason Samuels Smith’s ACGI tap company. Her mentor is Barbara Duffy, a founding member of American Tap Dance Orchestra. Exciting stuff!

Lisa started by showing us the mountain view from her home in Calgary, before talking about how she got started tapping recreationally at 5 years old. It was only at 8 years old when she was put into a good class with a great teacher where she learnt the Al Gilbert syllabus and moved onto a competition dance studio for more performance opportunities, which she assured us is much more intense these days (Abby Lee Miller, anyone?!).

Like Stephen Mear from week 4, Lisa also had to catch up on ballet, jazz and modern when she moved to a new dance school, particularly as a relatively late starter (bit like myself LOL). She went to watch all of her teacher’s shows, which included guests such as Buster Brown and Heather Cornell. Her teacher took classes from these guys, which then influenced her teaching of Lisa’s classes, moving away from a fixed curriculum.

She then started attending all the Tap festivals, like Tap City. She moved to Toronto to get nearer to New York, then moved to NYC in 2008 on the advice of Josh Hilberman. Once she did that, the rest is history! She took classes with some of the the big names in tap (Buster Brown, Savion Glover, Dianne Walker, Barbara Duffy), and said she got her “butt kicked every week”.

She talked about her work with Gregory Hines’ amazing protégé Savion Glover, and his methods of teaching and choreographing. This led into a discussion of the musicality of the greats, where people didn’t do ‘counts’ but just scatted it out. I have to admit I’m not a counter and find it easier to remember rhythms.

Lisa suggested that we take a jazz track (maybe something by Oscar Peterson), find a few bars that you like and repeat the beats verbally (bah-dee-bah-dah-bah-dah!) and then try it again, making the sounds with your shoes. Even if it’s just a cramp roll or a paddle. (I’m definitely going to try this!)

Lisa La Touche was so down to earth and interesting to listen to. She was my favourite so far, and they’ve all been pretty amazing!

Trust what inspires you

Tap Dance is a way of being