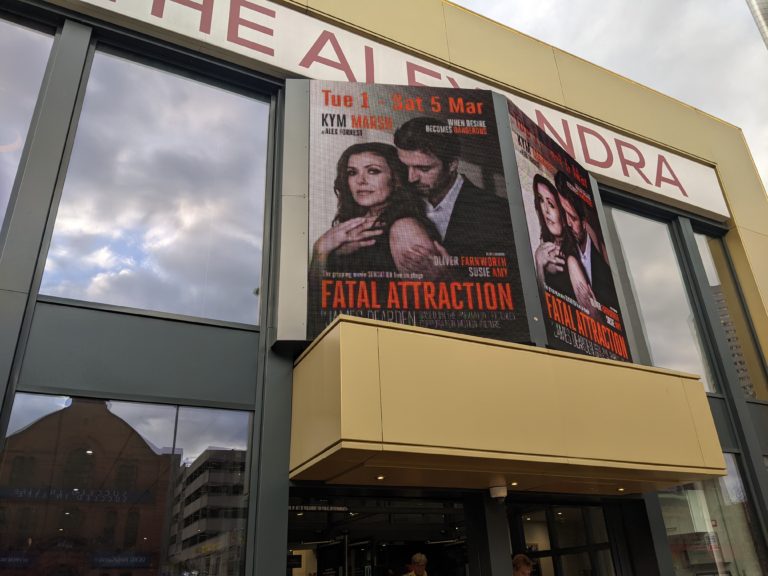 On Saturday afternoon I went to see Fatal Attraction on stage at the Alexandra Theatre in Birmingham, known locally as ‘the Alex’. I actually got wind of the show being on after having seen a TV interview with a member of the cast.

I’ve never seen the 1987 Oscar-nominated movie starring Michael Douglas and Glenn Close, so I had no expectations of the play. In case you don’t know, the story is of a supposedly happily married man who ends up having a one-night stand, but this one-night stand comes back to haunt him and starts to stalk him and his family, making his life very difficult…One particular incident that takes place in the story gave rise to the term ‘bunny boiler’.

The play starred Kym Marsh (Hear’Say, Coronation Street, The Syndicate) as Alex Forrest, along with Oliver Farnworth (Coronation Street) as Dan Gallagher and Susie Amy (Footballers’ Wives) as Beth Gallagher. The audience were on the edge of their seats the entire time, and the sense of foreboding was constantly hanging in the air. The staging was effective, with scenes set in various homes, Dan’s workplace and the bar where Dan and Alex meet. Kym Marsh was excellent as the desperate Alex and the British cast did a convincing job with their American accents!

The ending to the play is different to the movie, but on reading around, I believe this was the intention of the original screenplay, and also it was the ending that actress Glenn Close would have preferred. But of course, Hollywood had other ideas. You get more of a sense that Alex has mental health issues, rather than her being framed as the ‘crazy stalker woman’, and with all of his lame excuses, we actually wanted Dan to face the consequences of his actions.