I do this every year – I say “Oh I’m not bothered about getting into Strictly Come Dancing this year”, and then I get completely engrossed and I’m watching the live show, the results show, all the weekday It Takes Two shows and I’m all over the social media! Well, this year my favourites are the stunning AJ Odudu & new pro dancer Kai – AMAZING chemistry and fantastic routines, especially their sizzling Argentine Tango, which I can’t stop watching, a banger of a Jive on week one and THEN on Saturday night they pulled off a killer Charleston. Yes, I’m obsessed! I definitely think John & Johannes and Rose & Giovanni will be joining them in the final –  it’s such high standard of competition this year! 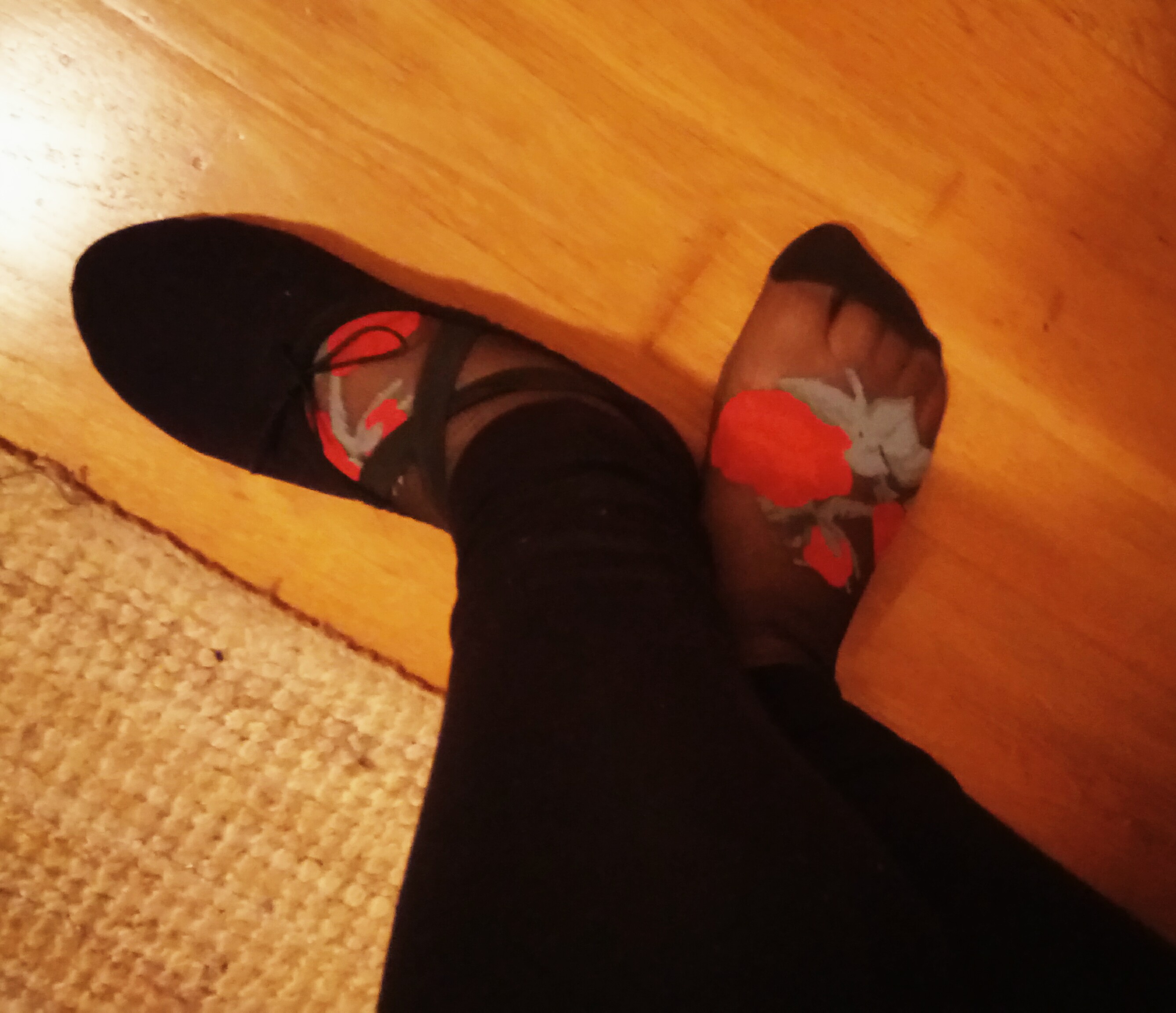 This evening I left work early to prepare myself for Ballet at City Lit…by stopping at Grind in Covent Garden to wake myself up with a coffee LOL.
Once I got to the college I layered up with black vest and smoky blue t-shirt, plus black leggings and cool netted socks with rose detail 🌹…

It was a full house this week so I was glad to get there early enough to get a space on the barre by the window because I always get too hot.

We ran through the usual exercises but with added content, creating longer sequences. It must have been the caffeine because I pretty much remembered everything! Well, apart from the retire-passe at the very end of the class. But you know how it is, you just style it out! 😉 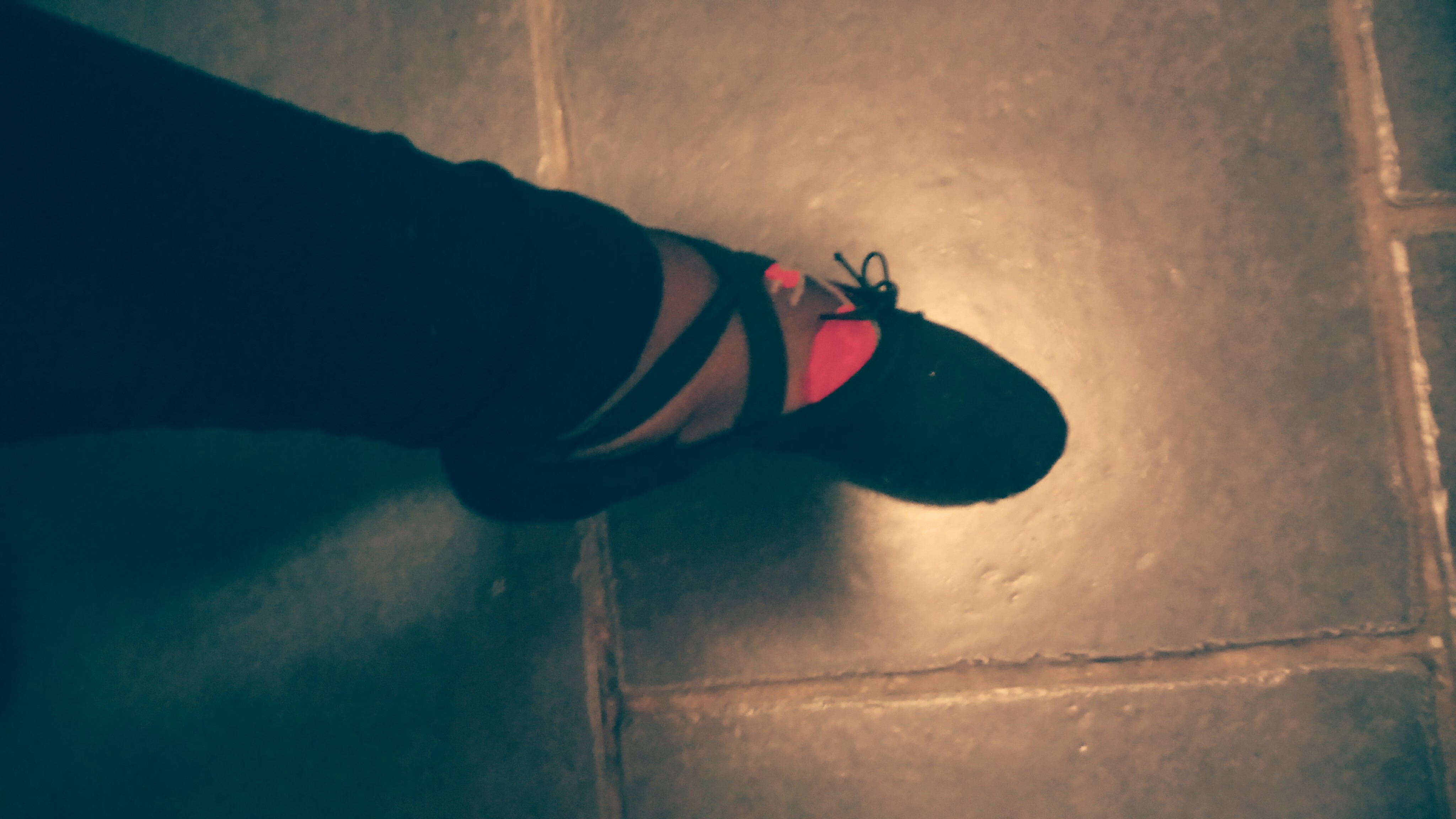 My left knee gave me a bit of trouble again because I realised a while ago that it is weaker and I find it hard to keep that leg straight when doing, say, the grand battement exercise. Still, I really enjoyed the class tonight and really worked on my arms and hands this week. I think because I’ve been watching Strictly and loving the expression you get in Latin-style arms and fingers. I’ve never thought about putting that into my ballet practice before, but it has actually helped me to understand expression in the fingers a lot more, and placing. Obviously you don’t want to put the arms behind your shoulders when in second position, or have a straight arm in fifth, but I was able to apply the expression in the hands as we are doing a lot more port de bras than I’ve done before. Still, I mustn’t go crazy and exaggerate…

So much fun –  looking forward to next week 🙂

Someone asked me today if I’ve been watching Strictly Come Dancing as I’ve been quiet about it this year. Yes I have been watching, and I also watch Strictly It Takes Two on BBC2 at 6.30pm every day! Obviously I need to watch it on catch-up when I’ve got Ballet.

My favourite people this year are Alexandra Burke (amazing!) dancing with Gorka, and then Mollie King (really funny) with AJ (channelling Swayze). I also think Susan Calman is doing great and so is Debbie McGee with her amazing developpe!

I am trying to stay away from Twitter on a Saturday night after becoming very annoyed with members of the public decrying those who are taking part who have apparently already had dance training:

It’s not fair! They shouldn’t win! Strictly should be about non-dancers! I can’t stand her! She’s so fake! She’s been in the West End! She’s done Ballet!

On the ballet thing, who hasn’t?? Most of the girls I went to school with did ballet lessons as kids. SO WHAT? Doesn’t mean they can walk into a studio and just start doing amazing Samba bachatas! Some of the dance training these critics refer to may actually be just some choreography for the stage (e.g. for singers). Not quite the same as the stuff they’re doing on Strictly.

Do you know what? If all the contestants were terrible:

a) the show wouldn’t have lasted this many years

b) you’d never keep the interest of the public

d) it has been going for so many years now, I think the pool of celebrities is a bit small to be restricted to those with zero dance training.

My SO and I had a few Salsa lessons and one Rumba lesson a couple of years ago. Although I picked up Salsa fairly well, I found the Rumba more challenging. Not every dance will suit everybody. Not everyone is used to partner dancing either. My SO found the classes a bit more challenging because he’s not a natural dancer, but he’s still had lessons, so does that disqualify him from Strictly if it were open to the public?? (Oh, he’s had dance training!)

I do find it interesting that the venom being spouted on social media was not directed at previous STAGE SCHOOL winners, such as Jill Halfpenny and Jay McGuinness…

Anyway, rant over, and no more reading of Twitter comments!

I would love to learn to Samba, but I’m doing enough at the moment!