Sorry – I’ve been M.I.A again! I guess I’ve been adjusting to a new life routine, now that I’m going into the office 1-2 times a week and I’m back at TAP CLASS every Thursday (apart from this week as we’re on a break). 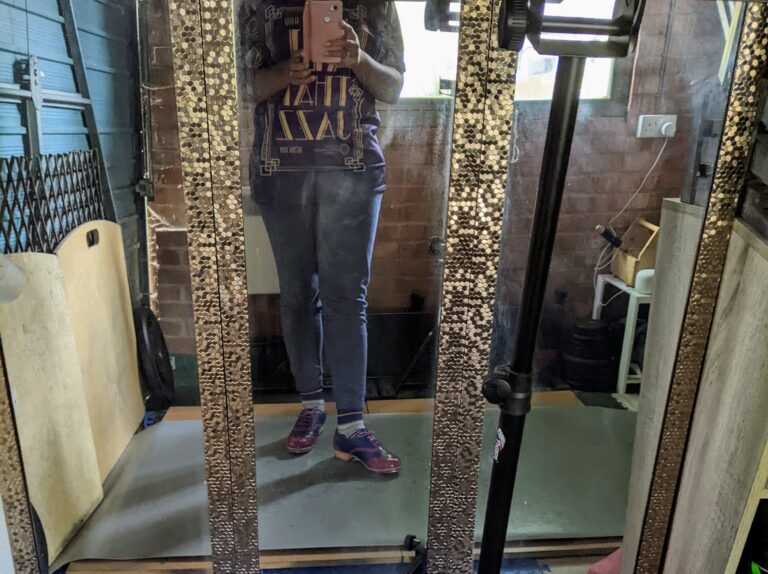 Tap class has been really great – I mean REALLY great. We’ve done lots of helpful exercises over the last few weeks, travelling across the floor, working in pairs and cementing some trickier combinations. We’ve been learning a routine throughout the 6 week course using Mick Jagger’s Strange Game. I don’t think I’d ever heard the song before, but I like it! The routine allows us to play with the rhythms, switching between the downbeat and cross-phrasing. There are a couple of turns in the middle of the routine (exciting!), and we had the option of doing a turn-and-a-half (540 degrees so they tell me) and landing in the right direction on time(!!) or just doing a half-turn (180). I’m not great with fast turns and dizziness these days, so I stuck with the half. It was for the best!

In other news – my 14 year old niece has recently started tap dance lessons! I think these are tacked on straight after ballet and she’s doing the ISTD syllabus of course. I’ve given her one of my portable tap boards so she can practise at home, and I told her I’m happy to go over anything if she needs any help, because I think she’s finding it quite difficult having started later than the rest of the class. I’m going to make sure I don’t overwhelm her with information! 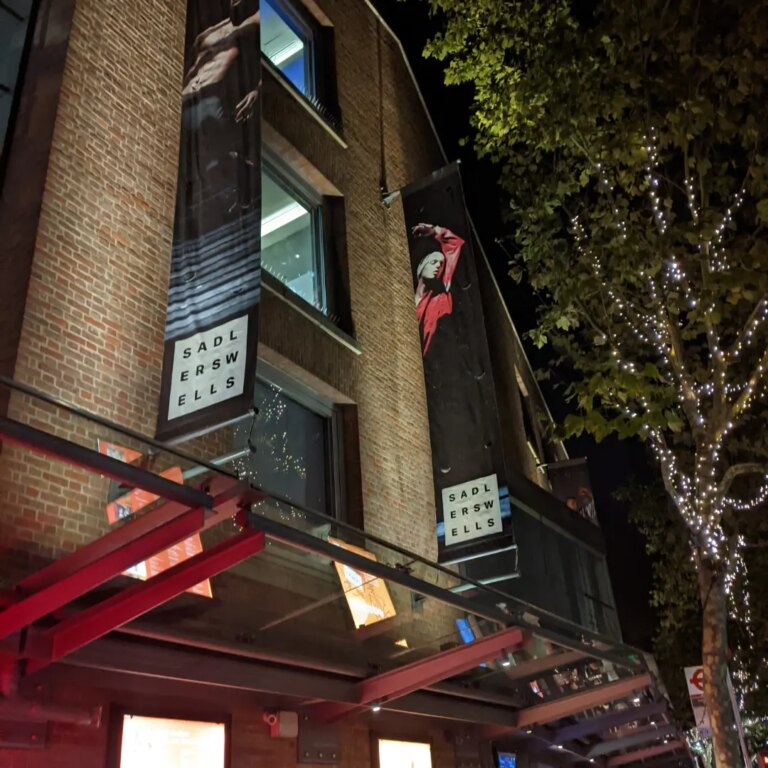 A few weeks ago my SO and I, being big fans of ZOONATION, went to Sadlers Wells to see their latest offering Mixtape, a 20 year celebration of many of their shows, including the incredible Into the Hoods, Some Like it Hip Hop, Message in a Bottle plus The Mad Hatter’s Tea Party, Tales of the Turntable and Groove on Down the Road. The whole thing was just so uplifting – stunning live music and singers, fantastic hip hop choreography and dance. There was also a wonderful exhibition on one of the floors dedicated to former member Teneisha Bonner who died far too young in 2019 from breast cancer. I remember her as a real stand-out dancer in Into the Hoods when we saw it not once, but twice many moons ago. Wow, I forgot how much I loved that show and the banging soundtrack.  Mixtape was such a great night, didn’t want it to end and yes, the audience clapped on the off-beat!

Back to the Future The Musical 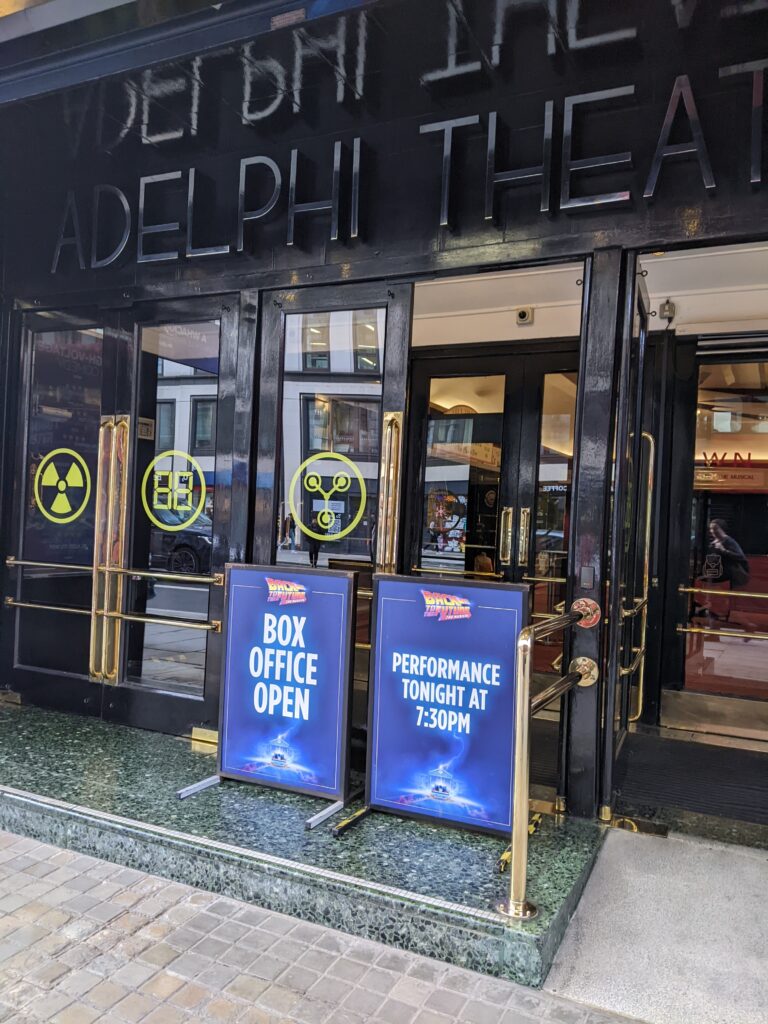 Last Thursday I met a former colleague after work and after a catch-up at Wahaca with Mexican street food, we went to see Back to the Future The Musical at the Adelphi Theatre on the Strand. Now this was an interesting one. I absolutely LOVE the Back to the Future films – they’re iconic and I can watch them again and again, particularly I and II. So I was interested to see how they’d adapted the first film for a West End musical.

In all honesty, I thought Doc Brown and George McFly were excellent, down to mannerisms, humour, dancing and everything. Marty McFly was pretty good. Not all, but a lot of the dialogue was verbatim, so if you know the film, you know what’s coming. They changed the reason why Marty had to go back in time to save the Doc. The set and especially the DeLorean was AMAZING – five stars! But I had this feeling all the way through that much of the supporting cast were fresh out of musical theatre school and a little inexperienced. I like the fact the show used the original theme music throughout and of course the iconic Huey Lewis & The News songs which popped up here and there, plus Chuck Berry’s Johnny B Goode at the school dance but some of the singing grated in places, such as when the actress playing Marty’s girlfriend Jennifer sang The Power of Love – it was a bit over the top musical theatre voice, if you know what I mean. I’d say good effort on the whole production, but something was missing for me and I don’t think everything can be successfully be made into a musical. Someone at my tap class who saw it last time around suggested it could perhaps have worked better as a play? Maybe. Still, it was a good night out.

Strictly Come Dancing is back! I’m not really obsessed with it this year, but I’m still watching the main show, the results show and most of the It Takes Two shows on weekday evenings because it’s fun and positive. It’s really refreshing to not be on Twitter with all the moaners and psychos this year! It’s a great cast of ‘celebrities’ again this year…even if some don’t take to dance as well as others… Last Saturday night celebrated 100 years of the BBC and although the songs were JUST AWFUL for dancing (the Eastenders, Blue Peter  and Casualty theme tunes, anyone?!), I have to say I was in stitches watching Fleur & Vito’s jive to Abba’s Waterloo (celebrating Eurovision) – I mean that WIG on Vito’s head took on a life of its own! HAHAHAA

Anyway, I hope you have a great weekend, and if you’re in the UK, don’t forget the clocks go back tomorrow night!