Hey, how’s it going? Well, my news is that I am back to work 2 days a week and the other 2 days I’m still on furlough until mid-September when I return to my normal working pattern and come off the furlough scheme altogether – hopefully permanently! It has been great to get back to some sort of normality even though I have been keeping myself occupied while not working.

What I’ve been doing

Of course I have been working on my soap side-biz, making products, doing social media posts, planning new recipes and packing and sending out orders, which have been fairly steady. One decision I made was to quit my HR studies. I’ve completed and passed 4 out of 6 modules, but I have been working at this thing for over 3 years, I have to pay money to extend the course 3 months at a time, it’s only foundation level and Human Resources is actually not where I want to be in 5 years’ time. (HR is also ridiculously competitive in terms of the job market, it can be difficult to move up into more strategic roles and the jobs were few and far between even before Covid-19). I think I’ll hang onto my student membership of the CIPD for the time being while I continue to work in my current job, just so I have access to the community forum, knowledge base and other benefits, but oh it feels like such a relief to get the course out of my hair!

As I’ve said in previous posts, my passions (besides tap dance!) are my soap biz and writing (plus I have an English Literature degree), so I decided to bite the bullet while on furlough and I switched to learning how to write copy, proofread and edit! I think this pandemic and lots of time at home has made many of us re-evaluate our lives, our priorities and how we spend our waking hours. I know right before the lockdown I was so sick of London and the commute and I wanted a new job after 10 years in this role…and now I feel like I have a clearer vision of what I want to do. What I really want and have always wanted is to be fully self-employed. Hopefully I can make it happen!

After having done the ‘I Love the 90s’ virtual charity run in May, I’ve just completed another 5km run in stages (‘I Love the 80s!) for the Roy Castle Lung Cancer Foundation, and I’m now doing a charity run for Alzheimer’s Research UK, aiming to get to 20km by the end of August….I’m at just over 7km so far! I started off by doing Couch to 5k (walk, run, walk, run…) but I found the stop-start aspect demotivating, so I’m now just running as far as I can in each session. I’m pleased to say I’m now able to run just over 1km non-stop, especially as someone who does not enjoy running!

Tap & Tea has finished, but some other interesting talks have now popped up online, which I’ve been attending. BOP Jazz have started a series called ‘Let’s Talk Jazz’, discussing jazz dance in the UK, and Tap Dance Research Network UK are running a series of panel discussions on the history of tap dance in the UK, and of course there is some cross-over with these as it’s all jazz. I joined the first one from TDRUK on Tuesday night entitled Remembering Bebop Jazz Hoofer Will Gaines. Guys, it was AMAZING and full of so many hilarious stories, and I really must tell you all about it in another post, but in short: Will Gaines (1928-2014) was an American tap dancer who worked with all the big bands, jazz musicians and singers in the US (e.g. Duke Ellington, Dizzy Gillespie, Ella Fitzgerald, Nat King Cole) and he ended up settling in the UK after a gig brought him here in 1963. Will is credited with influencing a whole new generation of tap dancers in the UK, including the creation of the fantastic London Tap Jam.

As we near the end of 2019, I thought I would share with you my list of 12 highlights of the year:

Next year I would really like to attend some writing workshops and maybe try to get something submitted and published again (e.g. articles, reviews) like I did when I was a student. I’d also like to get a new job…

When I was a teenager, I used to get Seasonal Affective Disorder (SAD) and would find I would get home from school in the dark Autumn and Winter months, lie down on the sofa and have ZERO energy to even get up to answer the phone, let alone tackle homework. I would dread the clock change every year.

Because of this, I made sure pretty much from then on to exercise or dance regularly during these darker months to keep my energy levels up and to just generally feel better and not let it get the better of me.

What is SAD? Also known as ‘Winter Depression’, the symptoms, according to the NHS include:

To help others out there who find this time of year sapping, I’ve put together some survival tips:

Let me know if you find these tips useful.

Do you have anything to add? What keeps you buoyed during the darker months? 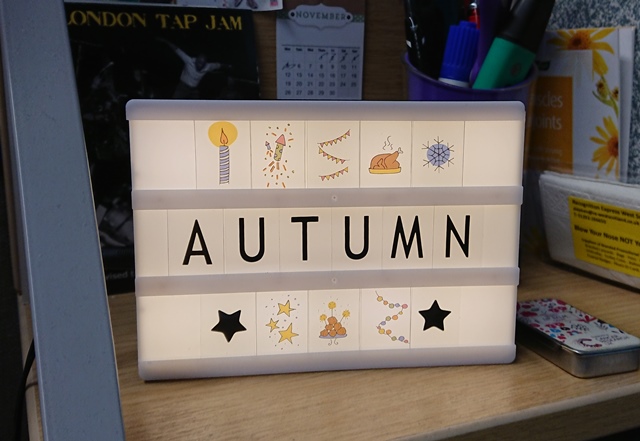 I bought myself a mini light box this week to keep me awake and motivated at work in the afternoon during the dark winter months – BOOM! Let’s see if it works…

Speaking of light, my SO and I went to watch the fireworks at a local school on Saturday evening to celebrate Guy Fawkes Night. Last year’s display was so good (way above our expectations of a primary school) so when this year’s display began it seemed a bit lame…but once it got going it was AMAZING! They also had a BBQ, so we enjoyed a burger and some tomato soup, oh and a cup of mulled wine!

Yesterday our systems all went down at work, including internet and phones, so after sitting around for a while and finding out that it could be 4 hours until IT diagnose the problem before even attempting to fix it, we all abandoned ship and went home. I got home by 1pm after a quick stop by the vet to pick up flea treatment for my cat, and had some lunch while seeing if I could log into my work system – nope! (Actually, we couldn’t log in again until gone 4pm). So, what did I do?

I’m going to try and keep up the ballet workout as much as I can to build up the muscles around my knees, which have been suffering a little with my rhythm tap practice. I also need to get my core back in shape too, and ballet is definitely an ALL-OVER body toner. After swimming at the spa last Thursday, I’d quite like to get back into swimming on Friday lunchtimes, but it might be one thing too many at the moment.

In the meantime, roll on Thursday’s advanced beginners tap class!