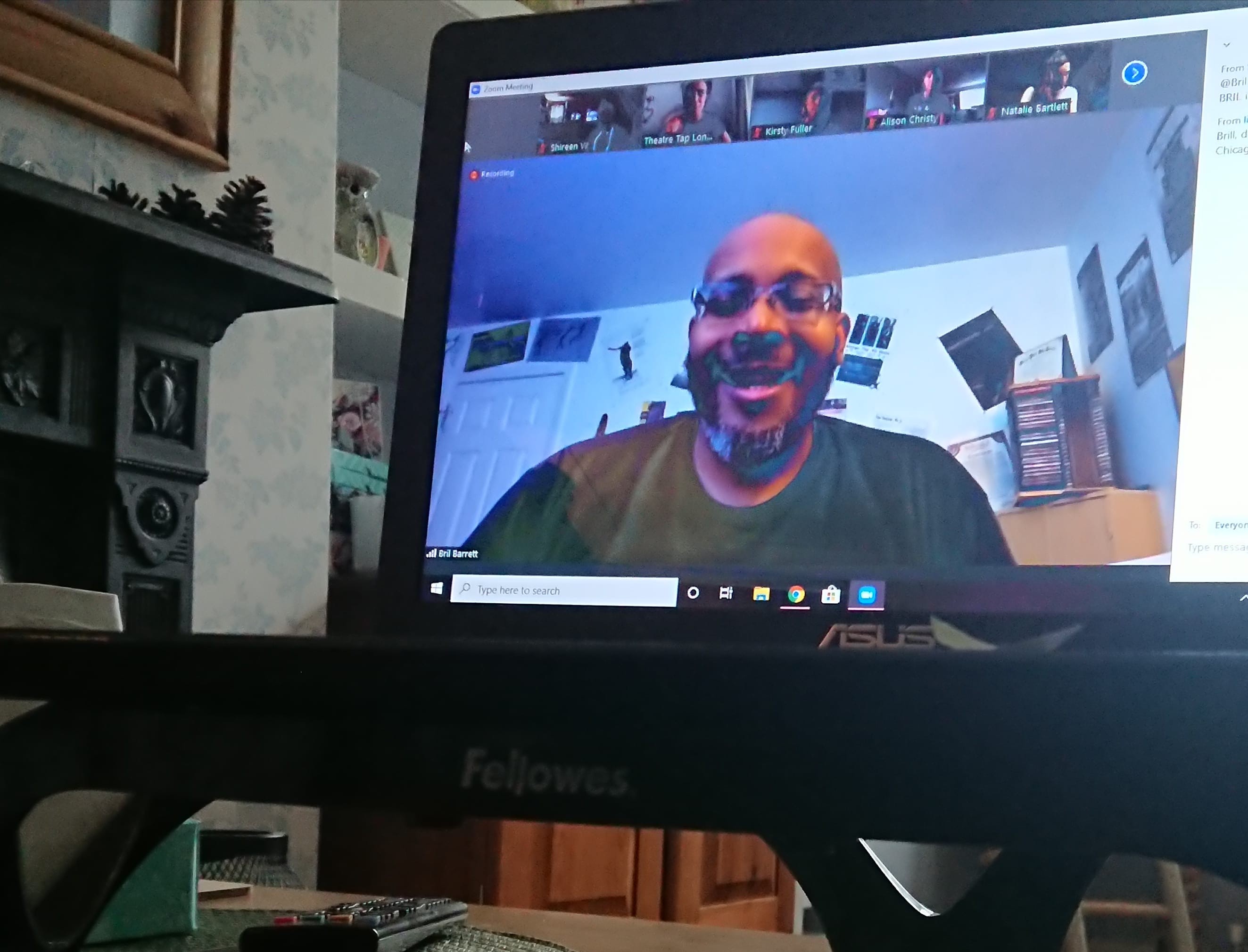 Bril Barrett is a tap dancer based in Chicago, founder of M.A.D.D Rhythms (Making a Difference Dancing Rhythms), director of the Chicago Tap Summit, a provider of tap outreach in Chicago’s public schools and even has his own TED Talk. He describes his mission as being “to preserve and promote tap dance as a percussive art form…”.

He kicked off by discussing the fact that tap dance is a musical art form, and this is how it began, before it was grabbed by Hollywood to become something where you copy a routine perfectly; the creativity being removed. The original ‘hoofers’ were all about the music and didn’t even have names for the steps – it was just ‘bah dee bah dah’. You weren’t taught, you just learnt. Somebody would be doing some steps – you either picked them up or you didn’t! (Reminds me of an oversubscribed class I did at the MOVE IT Dance exhibition in London LOL). Improvisation was how tap was created, and that was how Bril created M.A.D.D Rhythms.

Bril is a massive champion of improvisation, and he includes it in his classes right from the beginning, so particularly with children, there is no fear, and his goal is to help them keep this fearlessness throughout their tap education. (Obviously it’s much more difficult to be fearless in improvisation as an adult beginner, speaking from experience!)

He started learning tap in free classes at his local community centre in his Chicago neighbourhood, before following his teacher to another studio on the North side of the city, where family members had to pool together to pay for $5 lessons for Bril and his cousins. At this studio, all the boys had to take tap and gymnastics, echoing the skills of the studio founders, Sammy Dyer and The Dyerettes. At the age of 11 Bril saw a guy called Mr Taps in the subway, a tap dancing busker, and asked if he & later his cousins, could tap with him after school every day. Mr Taps improvised his dancing, and this is where Bril got his improv education. Amazing! It was through him that he was introduced to the Nicholas Brothers and the Four Step Brothers, which was life changing. Through a family member, he and his cousin were introduced to a talent agent and they performed as a double act.

Bril was a tap dancer in the world-famous Riverdance, and told us a bit about being on tour with the company (including backstage jam sessions), and how the show touched on the trading of steps and sharing of dance styles that happened between Irish immigrants and free Africans in New York. (There was a similar story line in the Irish dance show I saw last summer called Heartbeat of Home). As mentioned in other posts he was also in Derick Grant and Aaron Tolson’s show Imagine Tap. Bringing together people from different tap backgrounds (such as Ray Hesselink) this was when he wanted to stop being classified as a type of tap dancer. As Ray said in his talk, Bril agreed that Derick bridged the gap between the types of tap. Just because someone dances in a theatre tap style, it doesn’t mean they can’t do other things! He actually said he likes the term ‘tap dancer’ and doesn’t like the term ‘rhythm tap’. I definitely appreciate what he’s saying. The classes I attend are called ‘rhythm tap’ (and we do a more heel-drop style of tap), but I think that helps people looking for classes to know what to expect, just like you know with ‘musical theatre tap’ classes (I chose from a list of ‘American Tap’, ‘Rhythm Tap’, ‘Theatre Tap’, ‘Jazz Tap’ and er ‘Tap’ classes in London and picked ‘Rhythm Tap’ because it sounded interesting…and was close to work). But yes, call yourself a tap dancer, rather than a rhythm tap dancer because all tap should have rhythm! Right?

We also chatted about tap jams (London has an amazing one in Hoxton, currently on Facebook Live every other Sunday night) and Bril runs some free tap jams as a way of building community and also removing the barrier for those who are without, so that they too can learn, grow and perform. I don’t know if I’d be able to get up on stage just yet 🙂 But it’s fine to go along and watch, and see where the evening takes you!

This was another amazing talk, and of course we overran because there was so much to say! Maybe they’ll invite him back again. I just loved hearing about how he’s removing barriers and making sure tap is accessible to all, no matter your background.

Once you make tap your own, you’ll do it; you won’t need to be told to practice

Improvisation is how tap was created

If you’re a good tap dancer, style is a choice