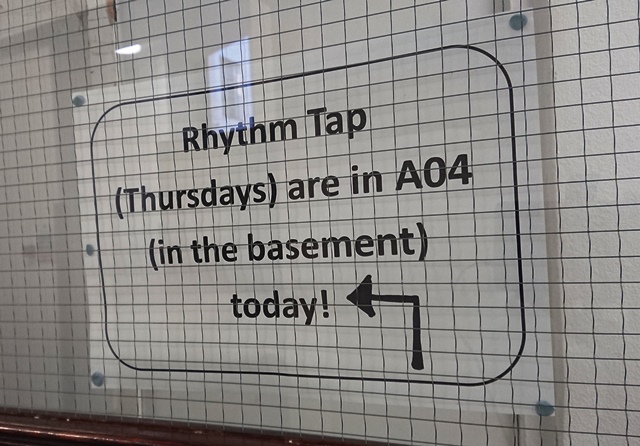 Aw, today was our last Rhythm Tap class of the year! I had been contemplating wearing some Christmas leggings and/or sparkly socks, but then I forgot all about it, and to be honest, I don’t actually have a pair of Christmas leggings. I have a Christmas jumper, but if I wore that, they’d be carting me off to St Thomas’ Hospital for overheating!

As you can see from the photograph above, our final class of the year was held in the basement studio ‘A04’ that we usually use on Wednesday nights, rather than our usual theatre rehearsal space ‘C10’, so while it was a familiar studio, it kind of threw some of us to be doing everything we’ve learnt (and more!) in a different space, if you know what I mean (C10 is square, A04 is long).

We had a full turnout today and we did our warm-up in a circle to some Christmas music and I noted that our teacher was wearing Christmas socks! We went straight into working on our Beautiful Tango routine, which is full of twists and turns and weight shifts. I would say it’s actually one of my favourites so far…maybe because I’m actually getting it! But really, there’s a lot of variety in there. We completed our routine, which went on to include slides and two Shirley Temples. I could do with practising these types of traditional steps more because I don’t want to be attending intermediate level classes and still unable to do basic combinations like a Shirley Temple or Suzy Q.

At the end of the class we had to perform the routine in 2 groups, with one group observing the other. I don’t know what it is, but as soon as you become aware that people are watching you, the nerves kick in and you get brain block! Well, I do anyway. I had the first half of the routine down ok, but when venturing into the newer parts, I knew something significant was coming up, but couldn’t remember what! Haha. It really wasn’t that bad.

Tip of the week: Keep your eyes forward and off the teacher!

It’s okay to watch the teacher when she’s demonstrating the steps, but when performing it try and do it as you remember it, rather than watching the teacher’s every move with the belief that you don’t know it.