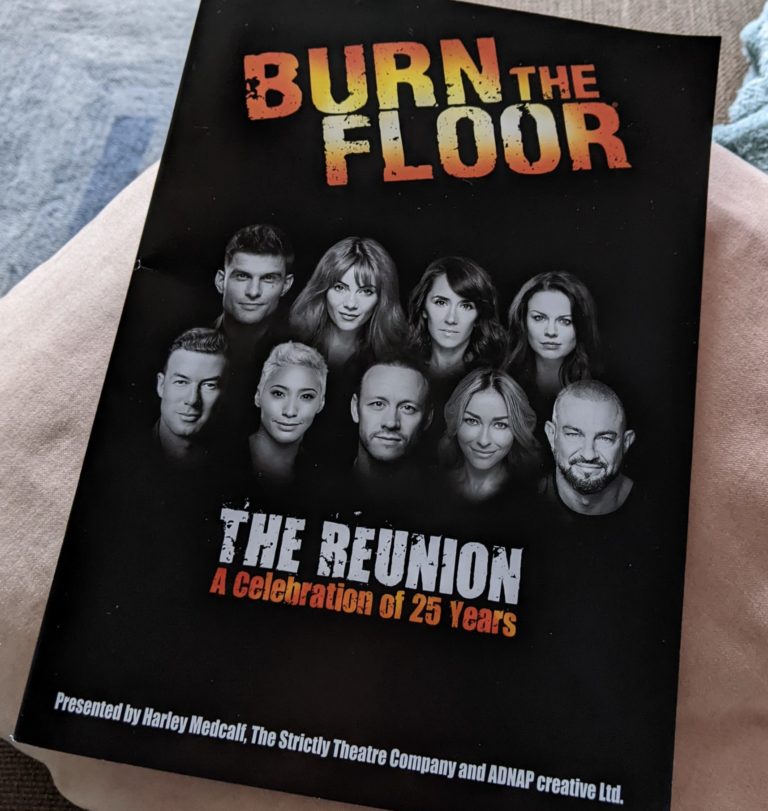 I know. I’ve been at the theatre a lot lately. All the way back in December when Strictly Come Dancing was heating up towards a dramatic final, tickets were going on sale for the spin-off touring shows, such as the Live Tour and the Professionals Tour . I couldn’t make the Professionals Tour dates, but instead I jumped in and bought tickets for Burn the Floor – The Reunion: A Celebration of 25 Years at the Symphony Hall in Birmingham.

Well, last Friday night was the night! My SO and I drove up the M40 to Birmingham on Friday morning and as the show was in the evening, we stayed over until Saturday. We parked up at the Mailbox and wandered into the centre to get something to eat. WELL, as we were walking along the road, we were approaching a zebra crossing when we suddenly saw a couple riding a tandem bike towards us. How lovely, you say! Yeah, except they were STARK NAKED. IN THE MIDDLE OF BIRMINGHAM FOR CRYING OUT LOOOUUUD.

Later on (when I was enjoying noodles, egg-fried rice, spicy pork and salt-&-pepper chicken) and had processed what HECK I had witnessed, I wondered if they had been protesting something. When I told my mum about it on the Saturday evening, she asked me if they had a banner. I told her I don’t know –  I didn’t want to look again to find out…HA-HA!

The show kicked off at 7.30pm and the auditorium was pretty much full, apart from the row in front of us (as usually happens, that row suddenly populated after the interval). The award-winning Broadway show Burn the Floor is the show from which most of the Strictly pros are scouted. The Reunion starred our favourite former and current pros: Robin Windsor, Aliaz Skorjanec, Janette Manrara, Trent Whiddon, Karen Hauer, Kai Widdrington, Dianne Buswell, Luba Mushtuk and sibs Kevin and Joanne Clifton, as well as other BTF dancers I hadn’t necessary heard of, but some of whom have been Strictly/Dancing with the Stars pros in other countries.

I don’t know what I was expecting, but the show was a much bigger production than I imagined! At the beginning, director and choreographer Jason Gilkison came out to introduce the show and talk about its beginnings and evolution. We gave a huge round of applause, and it was quite emotional for him and the dancers as it was the final time they would probably all perform together. Then the lights lowered and it began. These amazing dancers took us through a variety of incredible ballroom, Latin, contemporary and jazz routines to a fantastic set of songs, led by incredible singers Rietta Austin and Patrick Smyth, with plenty of light and shade. There was Charleston, cha-cha, samba, paso doble, rumba, waltz and bit of Fosse I believe. The colourful lighting effects were exciting and atmospheric, and the whole thing was really quite “wow” in that size of auditorium. We sat in the Grand Tier but if you were lucky enough to be in the stalls, the dancers performed and strutted in the aisles around you on several occasions.

I have to say that although everyone was fantastic, my stand-outs of the show were Karen and Janette – just fabulous and so much precision. Towards the finale the show blew up with an explosive jive to Tina Turner’s ‘Proud Mary’, which I LOVED of course!!

You know that big wheel keep on turning
Proud Mary keep on burning
And we’re rolling, rolling
Rolling on the river

And just when you thought it was over, they came back out to a really apt musical number – ‘Ballroom Blitz’! As you can imagine the applause went on for AGES! At the end the show’s creators came onto the stage at the end to a round of applause and the dancers were all hugging each other and some had their phones out filming the audience and capturing the electric atmosphere. The whole thing was so uplifting!

Hey! Hope you’re ok, hope you’re well? Sorry I’ve been MIA for a while. Things have been a little busy round here, and as you can see from my last post (and the photo above), I’ve also been engulfed in the world of Strictly Come Dancing – or should I say the World of AJ Odudu & Kai Widdrington? At the weekend, they performed an outstanding, champagne-quality Quickstep to Benny Goodman’s Sing, Sing, Sing, followed by a beautiful, sensual Rumba to Maria McKee’s Show Me Heaven. I mean, STUNNING! Anyway, it all comes to an end this weekend with the GRAND FINAL. Unfortunately, I’m hearing news of injury today, but whatever happens, they’re my WINNERS anyway! (Plus, we’re all really hoping they’re more than just good friends 🙂 )

I do this every year – I say “Oh I’m not bothered about getting into Strictly Come Dancing this year”, and then I get completely engrossed and I’m watching the live show, the results show, all the weekday It Takes Two shows and I’m all over the social media! Well, this year my favourites are the stunning AJ Odudu & new pro dancer Kai – AMAZING chemistry and fantastic routines, especially their sizzling Argentine Tango, which I can’t stop watching, a banger of a Jive on week one and THEN on Saturday night they pulled off a killer Charleston. Yes, I’m obsessed! I definitely think John & Johannes and Rose & Giovanni will be joining them in the final –  it’s such high standard of competition this year!

Here’s a run-down of my week in a series of bullet points:

We now have a two week break from tap, and I am not going to do any dancing in that break. Last year I booked a place on a La La Land Tap workshop at the Arts Ed school in Chiswick (West London) and then didn’t go because I’d had a bad day at work and I was DONE. My natural leaning is always to do more, but I am trying to do less – any dancing that I do will be in my garage! In the meantime, I am getting ready as early as possible for the 4 Christmas fairs I’ll be doing with my soap business.

Do you watch Strictly Come Dancing? Maybe you watch Dancing with the Stars if you’re in the US or elsewhere. My favourite couple is Ashley Roberts (from the Pussycat Dolls) and her professional partner Pasha Kovalev (Pashley hahaha). She did an amazing cha cha and I LOVED their Dirty Dancing salsa routine! All the routines are on the BBC Strictly YouTube channel. I really want to learn to cha cha, but I’m going to park that ambition for now…

Someone asked me today if I’ve been watching Strictly Come Dancing as I’ve been quiet about it this year. Yes I have been watching, and I also watch Strictly It Takes Two on BBC2 at 6.30pm every day! Obviously I need to watch it on catch-up when I’ve got Ballet.

My favourite people this year are Alexandra Burke (amazing!) dancing with Gorka, and then Mollie King (really funny) with AJ (channelling Swayze). I also think Susan Calman is doing great and so is Debbie McGee with her amazing developpe!

I am trying to stay away from Twitter on a Saturday night after becoming very annoyed with members of the public decrying those who are taking part who have apparently already had dance training:

It’s not fair! They shouldn’t win! Strictly should be about non-dancers! I can’t stand her! She’s so fake! She’s been in the West End! She’s done Ballet!

On the ballet thing, who hasn’t?? Most of the girls I went to school with did ballet lessons as kids. SO WHAT? Doesn’t mean they can walk into a studio and just start doing amazing Samba bachatas! Some of the dance training these critics refer to may actually be just some choreography for the stage (e.g. for singers). Not quite the same as the stuff they’re doing on Strictly.

Do you know what? If all the contestants were terrible:

a) the show wouldn’t have lasted this many years

b) you’d never keep the interest of the public

d) it has been going for so many years now, I think the pool of celebrities is a bit small to be restricted to those with zero dance training.

My SO and I had a few Salsa lessons and one Rumba lesson a couple of years ago. Although I picked up Salsa fairly well, I found the Rumba more challenging. Not every dance will suit everybody. Not everyone is used to partner dancing either. My SO found the classes a bit more challenging because he’s not a natural dancer, but he’s still had lessons, so does that disqualify him from Strictly if it were open to the public?? (Oh, he’s had dance training!)

I do find it interesting that the venom being spouted on social media was not directed at previous STAGE SCHOOL winners, such as Jill Halfpenny and Jay McGuinness…

Anyway, rant over, and no more reading of Twitter comments!

I would love to learn to Samba, but I’m doing enough at the moment!