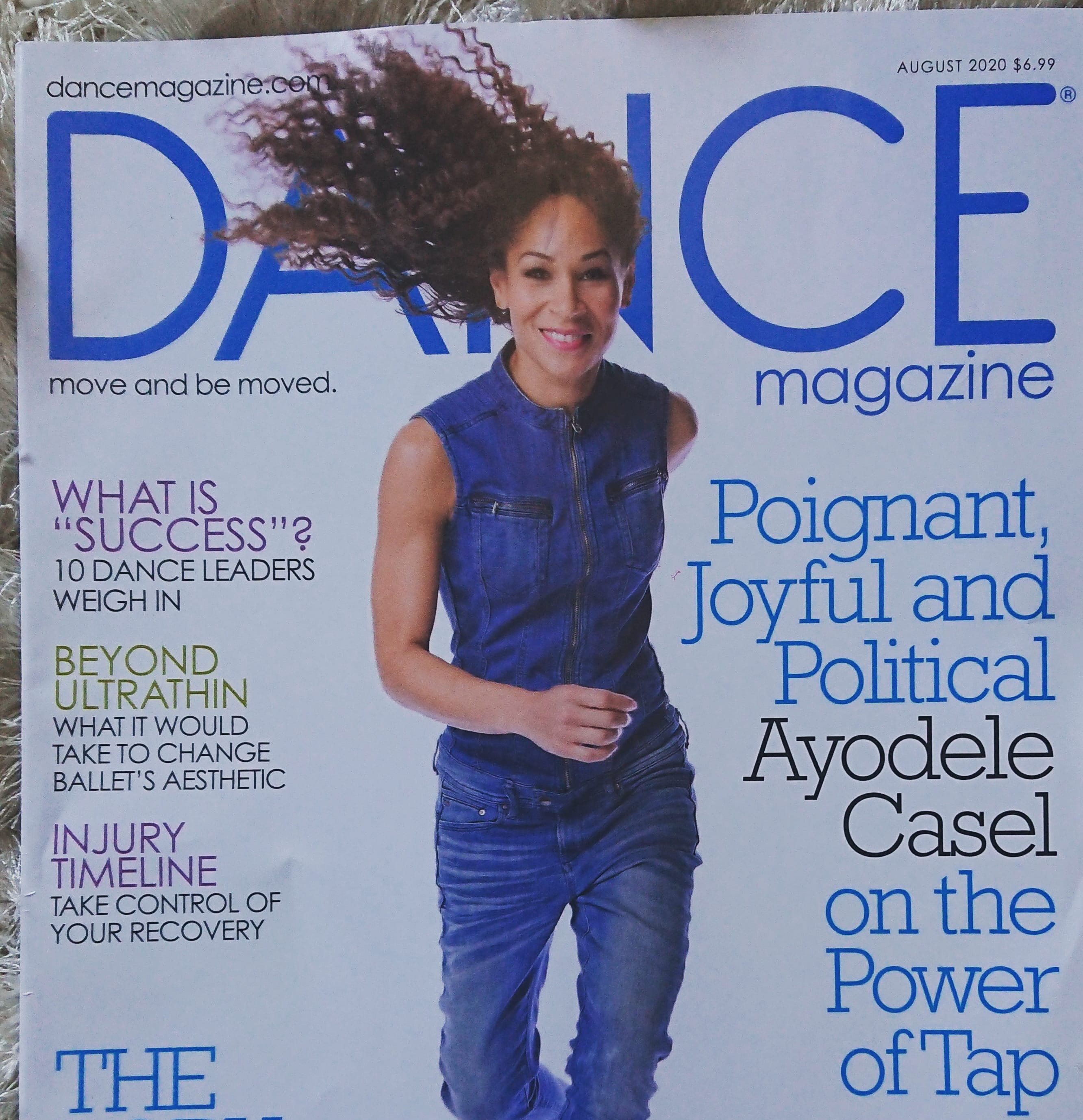 Guys, I’m so behind with my promised write ups of the Tap & Tea history talks, but I think I’m getting back on track, and so today I’m going to sit down to tell you all about Thursday’s tap history talk with special guest Ayodele Casel.

You may even want to have a cup of tea to hand!

Described by the late Gregory Hines as one of the “top young tap dancers in the world”, Ayodele Casel is a New York based tap dancer and actress. She is the recipient of numerous awards and accolades for her art, including the 2017 Hoofers Award, and she was named one of the ‘Biggest Breakout Stars of 2019’ by the New York Times. She was artist in residence at Harvard between 2018-2019 and became a Fellow of the Radcliffe Institute for Advanced Study at Harvard 2019-2020. She has performed with Gregory Hines, Savion Glover, American Tap Dance Orchestra and Jazz Tap Ensemble. She is co-director of Operation Tap, and as you can see from the image above, she is on the August cover of Dance Magazine. Her mission is to “make tap dancing a relevant presence in the arts”. .

I was really inspired to hear that Ayodele was a relative late starter to tap dance at the age of 18. (Not as late as me in my 30s, but it’s nice to hear from someone who didn’t start at 3 years old for a change!) She was actually an Acting major at university (NYU), but was drawn into tap dance classes as part of her Movement for Actors class. Prior to this, at high school a teacher had shown the class a Fred and Ginger musical as part of a ‘History of the Movies’ series and this first peaked Ayodele’s interest in tap. A year into her university tap classes, she met Baakari Wilder (“a real tap dancer!”), who invited her to classes at the legendary Fazil’s dance studio where she realised she didn’t know anything about tap. Baakari taught her the history of tap and introduced her to the idea of tap as self-expression.

A point that has come up time and again in these ‘Tap & Tea’ sessions is how the tap dancers of the hoofing culture taught – not as a transactional relationship (I pay you, you teach me), but with generosity and sharing life and experience, like a family. Ayodele agreed that there is value in the teacher-student studio structure, but it is worth remembering that not everybody is there to become an artist and often the teacher doesn’t have time to mentor the individuals that are. For her the studio structure stirred something in her, where she wanted to learn more. She mentioned another point that has come up many times – young dancers who take every class going, but are making very little progress – because they’re not using their initiative to do their own learning outside of class. How much class is too much?

After training with Baakari, Ayodele went onto train with Barbara Duffy (who we heard from a few weeks ago) at Broadway Dance Center. She joined the ‘Funk University’, a training ground for young dancers to be channelled into Savion Glover’s Broadway hit Bring in da Noise, Bring in da Funk. It had a predominately male cast, but workshop director Ted Louis-Levy allowed her into the training workshops, changing the game in what was still a pretty male art form and giving Ayodele a huge opportunity to develop her art. She described it as being akin to being allowed into the Hoofers’ Club of the 1930s & 40s, where no women were allowed!

This led onto discussion of her current Harvard research on the forgotten women of tap (something I’m immensely interested in too, and will be doing some research on myself once Tap & Tea has finished). Being the only woman in Savion’s show Not Your Only Tap Dancer, people greeted her after the show with comments like “I didn’t know women could tap dance” or “You dance like a man!” This made her want to delve deeper, and so she researched women like Jeni Le Gon and Lois Bright of The Miller Bros & Lois. These women were so talented and were doing amazing stuff, just like their male counterparts, but they were then largely forgotten until now. You can check out Ayodele’s digital series Diary of a Tap Dancer on NY City Center’s Youtube channel, which gives a voice to these forgotten ladies.

It was another fantastic Tap & Tea session, and I found Ayodele so inspiring! I completely agree that you as the student have to take the initiative in your learning if you want to progress. Practice! Read! Watch!

You have to take the initiative. Give yourself the permission to go ahead and be great.

How do we use technique to create meaningful expression?