OKAY, my first ever pair of customised tap shoes arrived all the way from Madrid last week! They’re handmade by Arte FyL (who specialise in Flamenco shoes) and I ordered them from through Tap Dance UK back in January, after looking through all the available colour swatches and designs on the website. I also had a ‘digital shoe fitting’ one Friday morning on Zoom with Tap Dance UK, where they got me to draw around my feet and read out the measurements, so they could place the order. (They get a special discount with Arte FyL).

I went for the Astaire style Oxford shoe in dark blue leather with aubergine patent and laces. They weren’t cheap, but I put some Christmas money towards them, plus I’m not paying extortionate train fares while I’m working from home. (I noticed a slight imperfection on them when they arrived, so I actually got 10% back). I’m not going to wear them for a full class straight away because I feel they need breaking in a bit. What I will do is wear them to mess around in and for practise and just see how they go. They don’t have the ankle cushioning that my Jason Samuels Smiths have, so I may need to stick some cushioning in the back so I don’t end up with blisters!

Can you tell I’m excited?! 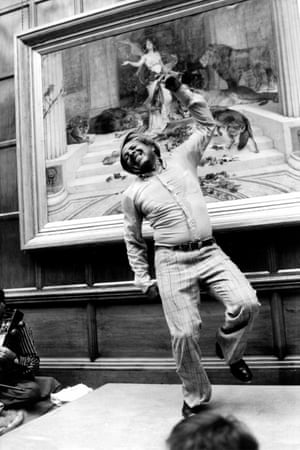 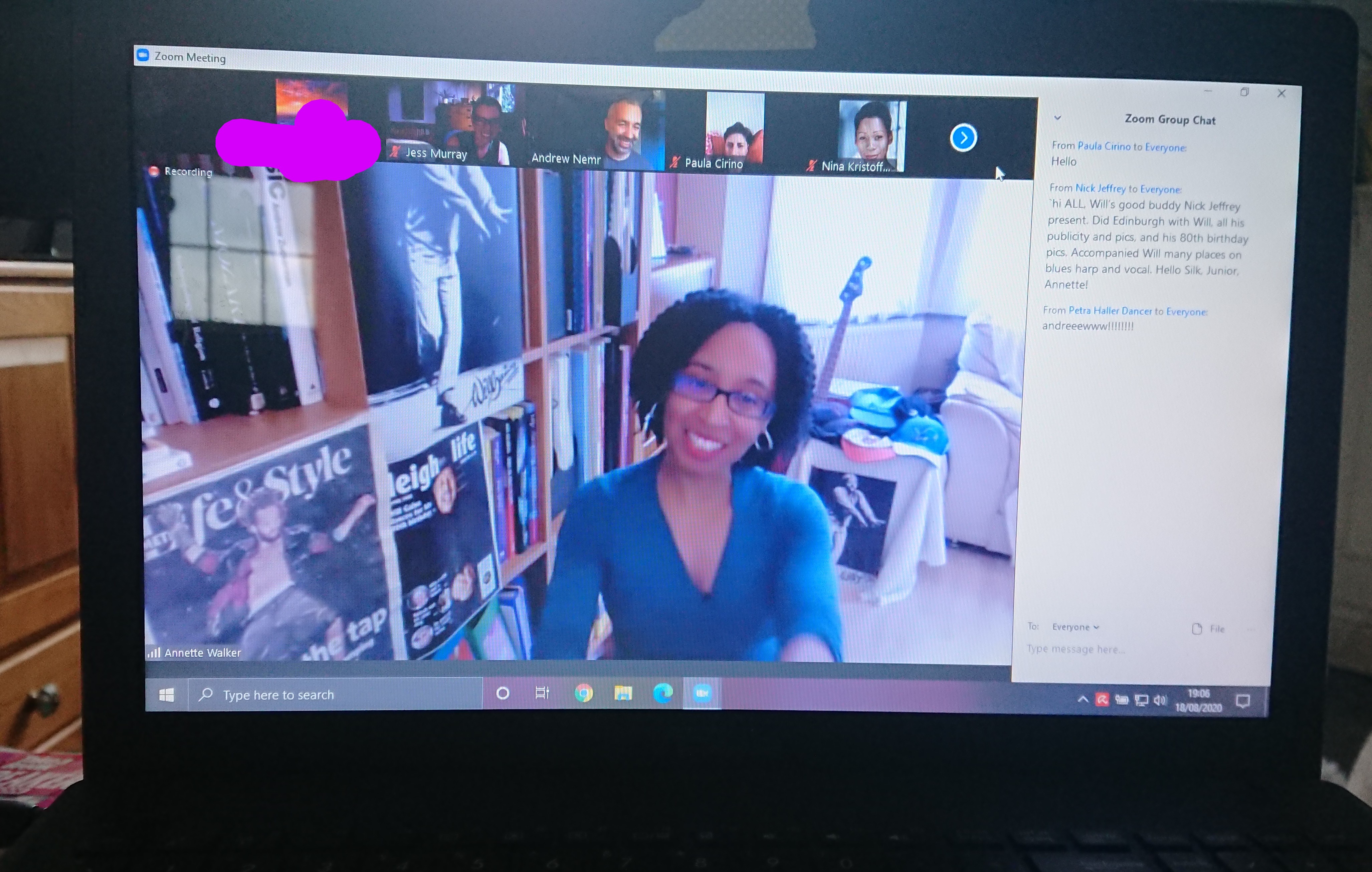 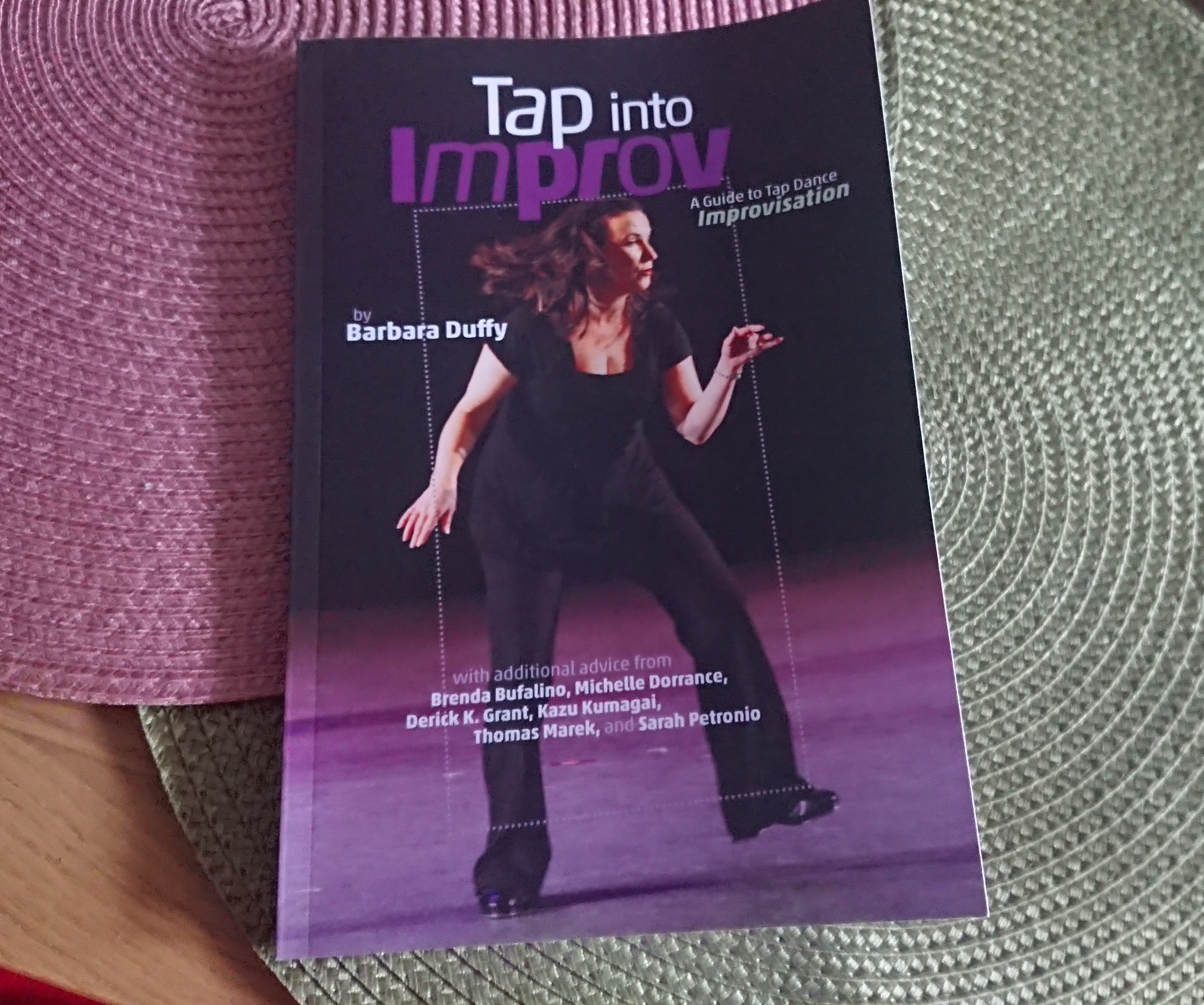 On the final week of the latest Tap & Tea series we were joined by special guest Barbara Duffy, author of Tap into Improv.

Barbara is a sought after teacher, dancer, actress and choreographer. She is a former member of American Tap Dance Orchestra (ATDO), performed with Gregory
Hines for the Clintons at the President’s Gala in 1996 which she called ‘the biggest gig of my life’, and she created her own tap company, Barbara Duffy and Company.

Barbara’s story is a really interesting one. She began her training at a dance school that managed to fit ballet, jazz and tap into a short half hour lesson! Needless to say,
technique was not taught, and this was evident when Barbara auditioned numerous times for the University of Massachusetts dance programme (five times in fact) and
was not successful. After this, she moved to Boston and took private lessons in high-heeled Broadway tap with Esther Dolan, going right back to the beginning. At this
point she knew nothing of ‘Rhythm tap’ and decided to quit dancing altogether. However, her sister invited her to watch a local tap show, and Barbara was BLOWN AWAY by the musical tap of Leon Collins. It wasn’t until Leon Collins’ dance studio relocated to be opposite her apartment building that Barbara got to study tap with him. (It was at this point that she switched from high heels to flat tap shoes). Here Barbara was introduced to tap jams and improvisation, and she was freaked out!

Tap study was a much slower process than many of us are used to these days – every week there was an hour and a half class where they’d learn just 8 bars and then go away and work on that. Similarly, while studying with Brenda Bufalino later on, classes would include things like a 5 whole minutes of just clapping and flapping, giving students the time to really settle into it and find themselves before moving onto something else. Back in those days people really STUDIED and were intentional. Nowadays, she observed, many students just want to go to class for fun and to socialise and express themselves, but they don’t work on what they’ve learned and so they turn up each week with no memory of the week before – and they see zero improvement.

After Leon Collins died in 1985, Barbara moved from Boston to New York to study with Brenda Bufalino, and was invited to join ATDO, with whom she performed and toured until around 1995. Being in based in New York City she also got to study with famed theatre choreographer Henry Le Tang and learn all of his routines. She was also invited to assist a teenage Savion Glover in ‘translating’ his choreography for his young students – and this was how Barbara Duffy’s name got out there.

The legendary Jimmy Slyde was known for having a regular Wednesday night tap jam where he would call people up onto the stage and say “show me a time step!” Barbara started going along to try and get over her fear of improvising, but the negative self-talk would creep in while she was performing, and then she would avoid going back. (I was really keen to hear Barbara speak about getting over her fear of improvisation, because I have felt that fear…and it’s coming back again with another improvisation workshop happening next week!) Her advice was to ‘stay where you are’ until you’re ready to move forward because improvisation is a “life-long process”. An example she gave was where you might berate yourself for doing the same step again and again…but that’s absolutely fine and you will get better! I’ll try to remember this and not beat myself up if I get stuck only doing paddles next week. A guy at our improv workshop last year kept returning to a spin on the spot if he ran out of ideas – and it was fine! (Better than running out crying, am I right? LOL)

Barbara described how rhythm tap was such a man’s game back in the day, but then Gregory Hines suggested that she get some women together, and Barbara Duffy & Company was born! Company dancers included Michelle Dorrance, Lisa La Touche, Maya Jenkins, Flavia Costa, Pia Neises and Karida Griffith among others, and the goal was to allow each dancer’s voice to emerge. Sadly, the company had to fold when they ran out of money during the 2008 recession.

While studying for her ESOL degree, Barbara wrote the amazing guidebook Tap into Improv for her course project. (Being a natural procrastinator, she benefitted from having a supervisor and a deadline!) The book came out of starting to teach improvisation to her own students and realising that they were just as afraid of it as she’d been. (It’s a great book, and I’ll try and review it at some point – but either way, make sure you get yourself a copy!).

I wrote down SO MANY notes from this Tap & Tea talk because Barbara had LOADS to say and was so interesting to listen to! I managed this, even though I had to run upstairs and relocate to the landing at the top of the stairs because my WiFi signal decided to play up! Here are a few of the useful tips she shared with us:

Bring yourself to the class and be present and open. What are you bringing to the class? Are you engaged? Or are you waiting to be given something?

Sing everything. It will up your game immediately.

Practice everything before the next class.

Don’t listen to your feet; decide what you want to hear.

It you want to grow and expand, you’ve got to feel uncomfortable sometimes.

Check out this video of Barbara (on the far right) dancing with Gregory Hines at the President’s Gala for Bill Clinton in Washington, DC in 1996:

Great news – we start a new 4-week series of Tap & Tea next week!