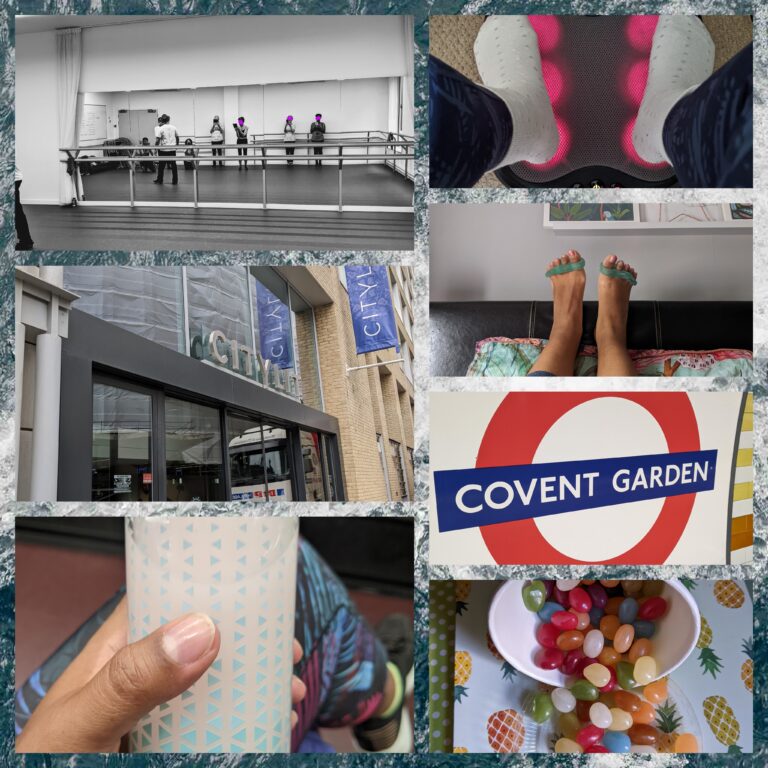 At the end of July I  was excited to attend the Improvers/Intermediate tap dance intensive at CityLit in London’s Covent Garden. I was only able to attend 2 of the 3 days because I didn’t have enough spare leave as I had 3 days booked the following week for the Commonwealth Games!

I’ve been to this tap intensive twice before, but on those previous occasions I burned myself out and I don’t think I had my hydration and nutrition quite right, because as I mentioned before, I felt hung over the following day! This time I made sure I drank enough water throughout, was fuelled and hydrated beforehand, had jellybeans I could pop during the class for extra quick energy, and then I had an electrolyte powder to add to my water for the journey home. IT WORKED!

I think what especially helped was that I’m now mainly working from home, so I was starting from a place of rest rather than the cumulative daily commute exhaustion of the past. Arriving on day 1, I was really pleased to see A and J from my pre-pandemic tap classes in Lambeth! It was so nice to be in a studio and dance with other people again after 2+ years!

Over the two days I was there we learnt the BS Chorus and worked on some other routines, timesteps and exercises, including travelling corner-to-corner across the studio. I particularly enjoyed being pushed to do some more advanced stuff and add in those extra sounds, and also to get lots of helpful feedback. It was great after having been dancing at home in the garage with limited feedback – it’s just not the same doing classes online! It was a really fun couple of days and we filmed the routines and exercises at the end of each day to take away for practise. On my last day (day 2) I realised I had been trying to film using my phone on camera mode instead of video (I mean, REALLY!) and then I wasn’t there on the final day, so J was kind enough to send me her video. It was great to learn some new things – like the BS Chorus and what a Maxi Ford is! I’m still not great on wings as I’ve not spent much time on them in classes…but I know what I need to do!

When I got home I put my feet in the air with yoga toe-spreaders for ten minutes, then plunged them into a bowl of water with Epsom salts. The next day while working at my home desk, I had my feet on the heated foot massager, which did the job!

By the way, the Commonwealth Games in Birmingham were AMAZING! Such a positive, exciting atmosphere! We saw Athletics (100m T11/12, 400m, 800m heats and Heptathlon Long Jump – including Katarina Johnson-Thompson) and then we saw Jack Laugher (1m springboard) and Andrea Spendolini-Siriex (10m platform) win GOLD for England in Diving! I mean, these people are so inspiring – the WORK they must have put in. The diving was my favourite part, I guess because I’ve seen a lot of athletics before, and the atmosphere was amazing – everyone in the audience holding their breath as the diver got up into a perfect armstand at the edge of the 10 metre platform…before they threw themselves off into various twists and somersaults, finally hitting the water like a fish. WOW

Did you see any of the games? I didn’t see much of the gymnastics on TV, so I’ll catch up on BBC iPlayer.

I think those two days of intensive tap really geared me up for returning to in-studio classes from September – I think I just need to decide if I’ll return to my usual class or try somewhere else for a change…it would be great to see everyone again after all this time. In the meantime – more practise and Pilates!