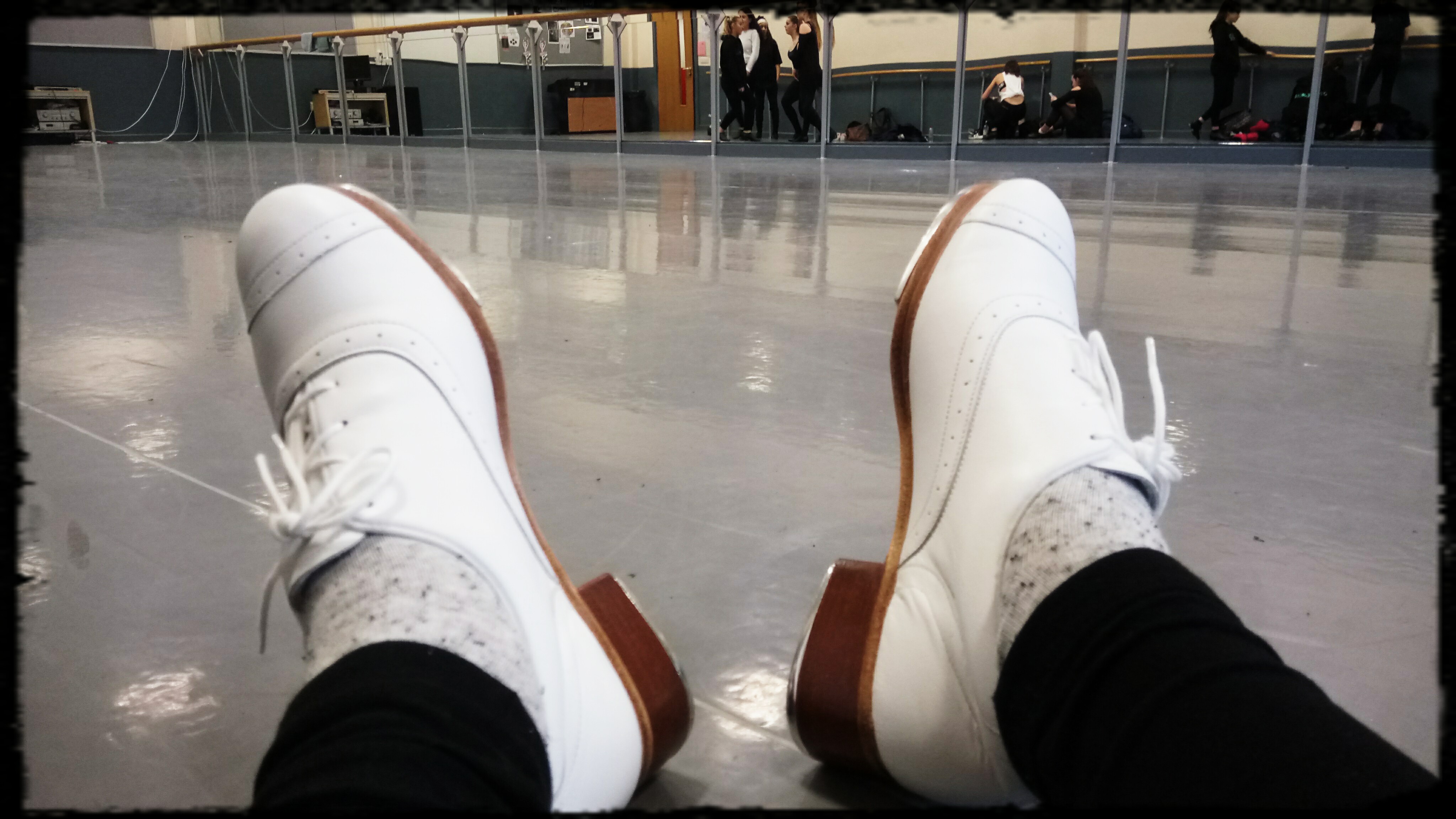 Wow, what a weekend! Now that I’m back from Manchester and have had 12 hours’ sleep I can tell you all about my experience of the 2nd ever Tap Festival UK Winter Intensive.

My SO and I drove up to Salford (Greater Manchester) on Friday, reaching our accommodation in the afternoon. After a rest and a bite to eat, we went to the Festival venue Pendleton College for the Professional Showcase at 7pm. We were all made to wait in the small canteen area until the start, but in the meantime there was a presentation to the amazing Jo Scanlan of Tap Attack and a short tap performance by her very talented son. 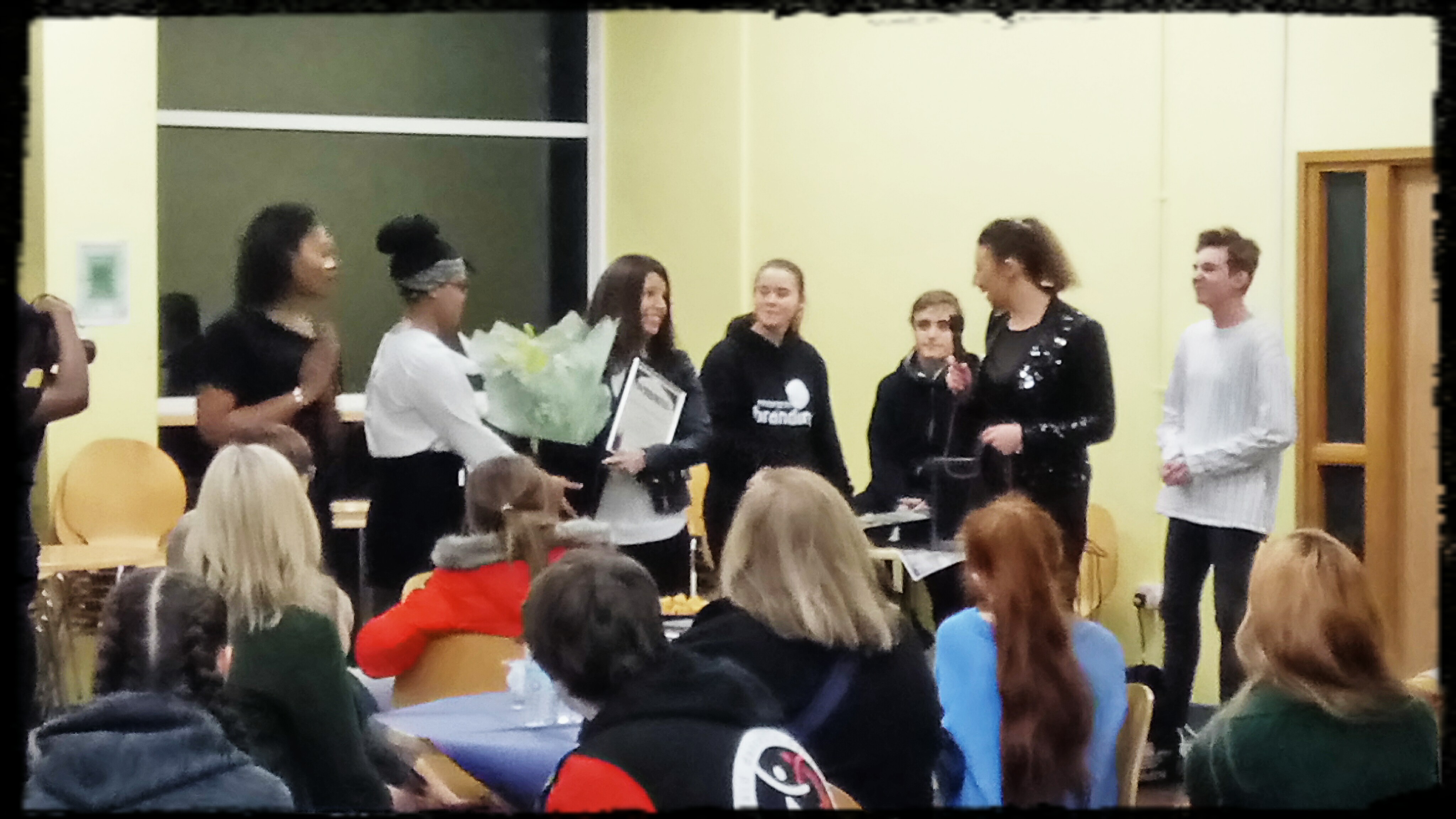 Next, we were shown through to the Eccleston Theatre where the Apartment 33 ‘Where Dreams Are Made’ Professional Show was taking place. Written and presented by Maud Arnold, and choreographed by her sister Chloe, the show featured some of the weekend’s faculty members, and shared the story of how tap dancers were able to relocate to Chloe and Maud’s actual Apartment 33 in New York to be able to “pursue their tap dance goals and dreams”. The score included Alicia Keys, John Legend, Beyonce and Rihanna, among others, and the dance was a fantastic blend of tap, crump, contemporary and more. My favourite performance was pocket-rocket Robin Passmore tapping furiously to Destiny’s Child’s Survivor. So good! The Syncopated Ladies’ routine to Beyonce’s Formation was also a big crowd pleaser. Unfortunately, I had someone’s huge hair in my eyeline, but I managed to move a seat along so that I could actually see the performers’ feet! 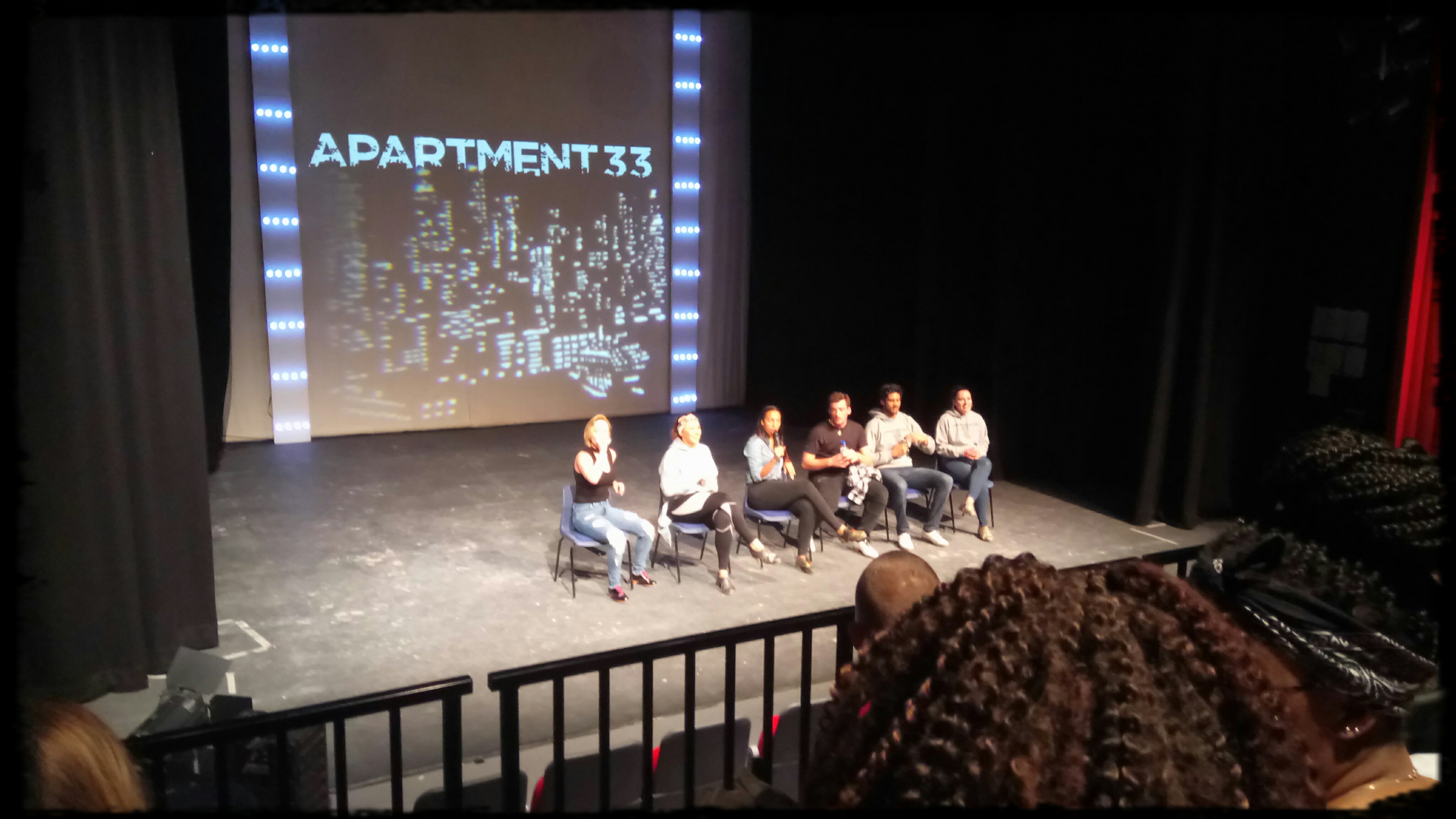 After the show was a Q&A with the panel of Suzanne Clandon (founder of Tap Dance Festival UK), Maud Arnold (Syncopated Ladies), Robin Passmore, Vikas Arun, Linsey O’Neal, Josh Nixon. There were some good questions from the audience such as “did you ever feel like giving up?” and lots of advice on pursuing your dreams in the performing arts. You have to be a go-getter!

Saturday morning my SO dropped me back at Pendleton College and went off to run and then go and see friends near Stockport. I went in with my dance bag, a bit apprehensive because last night seemed to be all teenagers, which made me wonder if there would be ANY ADULTS in the classes on Saturday. I went into the ‘holding area’ as per last night and found some adults (phew!). There turned out to be quite a few there for classes thankfully! I had received an email in the week to say that the classes were geared towards teens, so adults were welcome to attend the ‘Teachers’ Studio’ classes free of charge. I thought I might do that for the final class of the morning, but I didn’t in the end!

Before going to any classes, we were in the sports hall for the AFRO FUNK warm up with Maud. Ok, it was only about 20 minutes long, and I heard someone say “I’ve got a stitch!” Yep. That’s Afro Funk! It’s kind of dance hall style winding and grinding and body isolations. Lots of fun, a real laugh, but OH BOY does it wear you out.

After this we were shown by the respective people where to go for our class levels. I was in the Beginners/Advanced Beginners (0-3 years experience), and we had a very nice studio with mirrors. 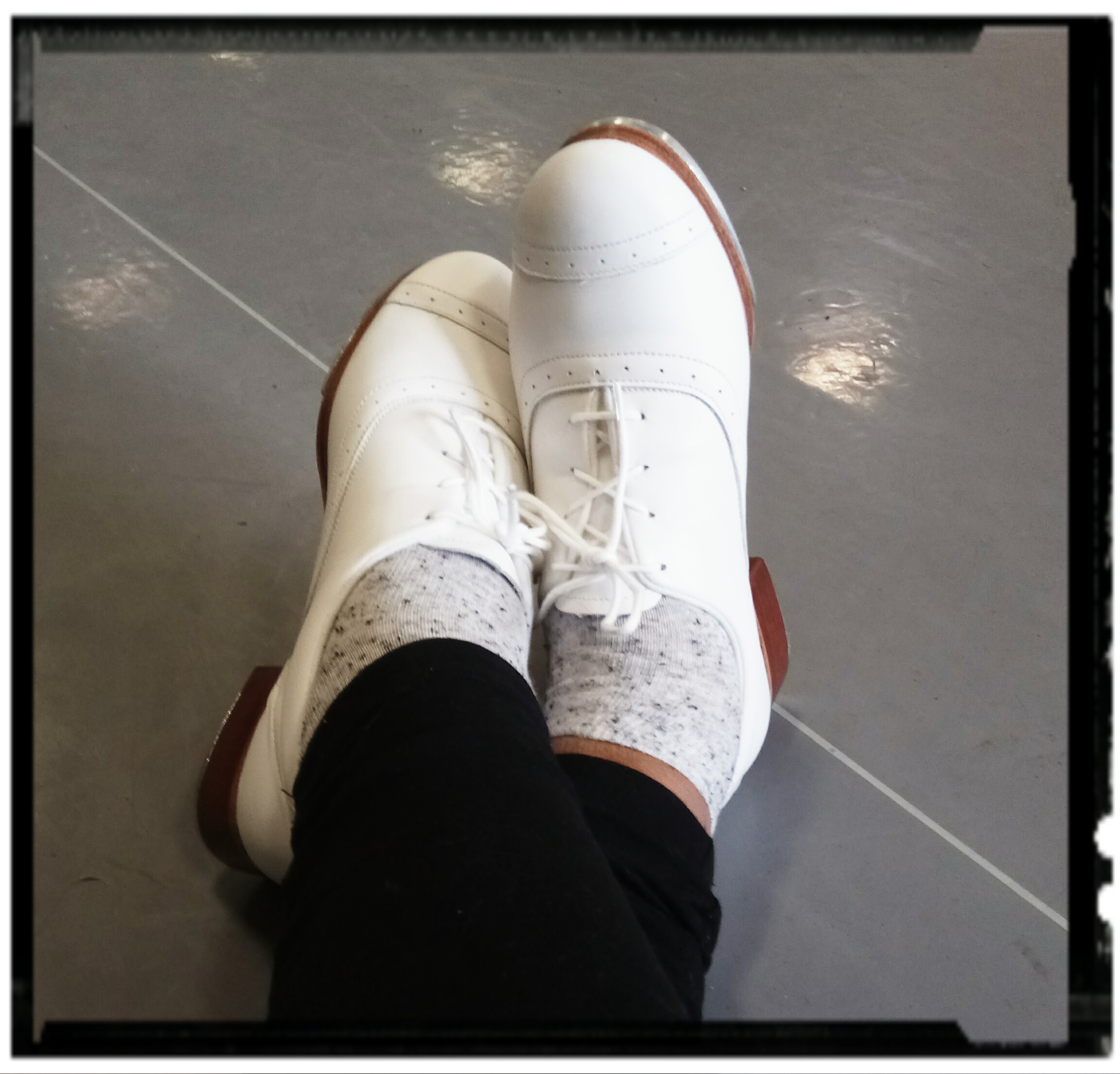 This was a really fun class where we did some warm up exercises at the mirror and across the floor (including travelling on one leg – wow that burns) and then learnt a short routine. I was breaking in my Jason Samuels Smith tap shoes, and they were fab! That was actually my second time learning with the Guinness World Record holder Jo – the first time was at MOVE IT 2017 in London.

A proper tap drills class with a proper drill sergeant! Some people find drills tiresome, but I love it. As was explained to us, that is how you get better and cleaner. Watching Robin on stage the night before, she stood out as someone who was really on it and exceptionally precise, so I was looking forward to learning from her. Her demonstrations were amazing and we were just standing there with our mouths open! We worked on crawls, shuffles in all directions, paddles, riffs, pick-ups, pull-backs AND I had my first ever go at wings! Very exciting. Couldn’t get the sound, but at least I know what I should be doing. Now go home and practice!

Vikas explained at the beginning that we were going to find the class too difficult. Um, what? But then he said that there was no point him flying all the way from the US and us paying for a class that was too easy. Very true. We were there to be challenged! He also said please ask questions or say if you don’t get something, otherwise he’ll move on.

Now, I thought it was going to be a class where you were encouraged to come up with a bit of your own choreography (have to say I wasn’t especially up for that on a Saturday morning, and was considering beforehand running along to the Teacher’s Studio with Jo Scanlan), but we were actually learning choreography.

We learnt a really cool routine, and I think it moved a little faster than I’m used to, but he threw in useful tips about weight placement and height, which helped me with one particularly tricky step which you’ll see below (toe-heel-f-lap, toe-heel-f-lap). He also said, as had been said throughout the morning that it is better to try and get that one thing right than to just do it fast but get it wrong. Some other sound bites I picked up were ‘don’t practice until you get it right, practice until you can’t do it wrong‘ and ‘learn the drums’. I actually decided to either learn drums or learn to tap, and I went with tap. I should do both!

Here’s what we learnt (slower version first followed by with the music):

It was such an amazing day and I’m so glad I went! It was scary to go on my own, but it was fantastic and got me out of my comfort zone…again!

If you have the chance to go to any sort of dance festival or intensive, go for it!