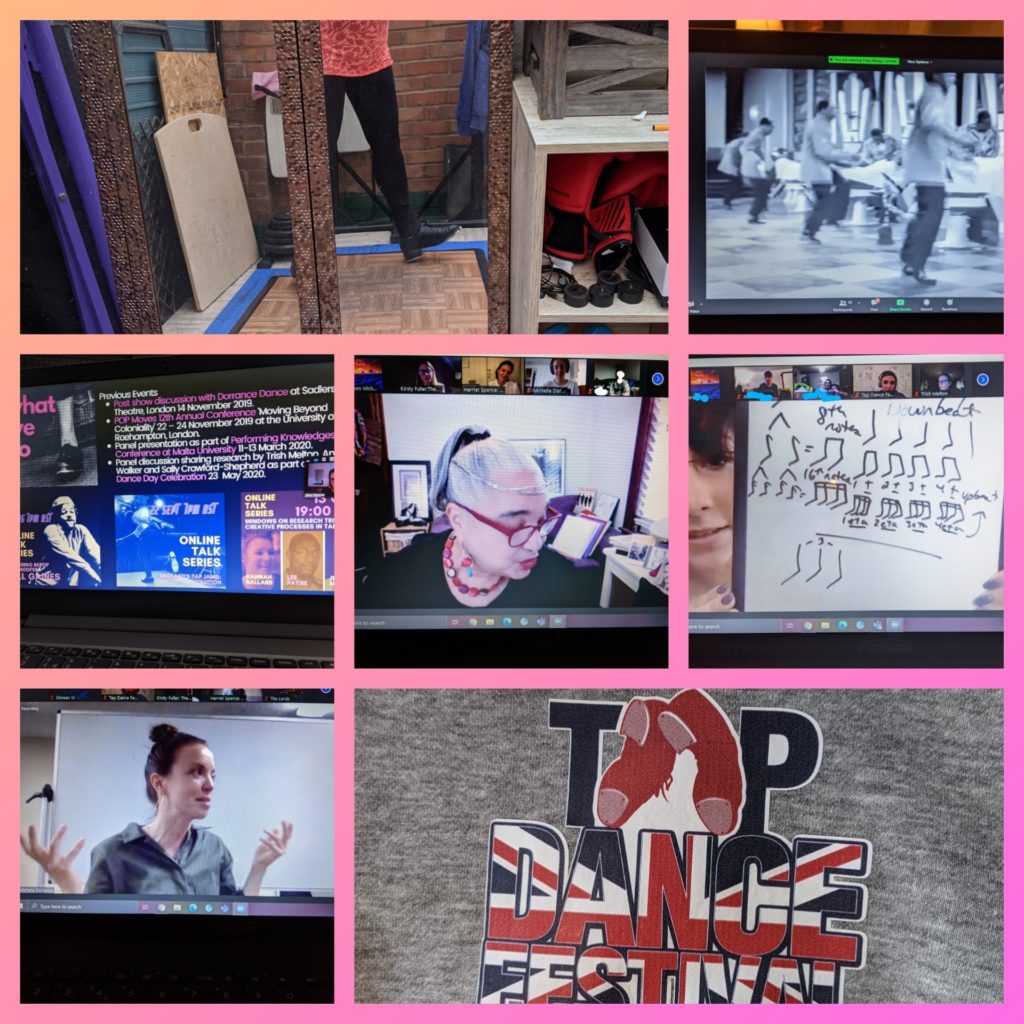 It has been a crazy time of tap for me over the past week –  the 5th Tap Dance Festival UK happened (virtually) and I registered…even though I said I was going to take a break! Plus, there were some other tap events going on at the same time, so I had a pretty packed timetable! I bought a 3-technique class pass this time because I wasn’t so interested in learning choreography when I do this in my weekly class, plus I had the Standards Sessions hosted by my teacher’s company, plus I had access to all the community events of the festival.

LA-based dancer Dante Lara opened the festival by throwing down some tracks and chatting with some of the faculty.

I’d attended a music theory session with Sarah previously and found it SO helpful that I jumped at the chance to attend this session with my notebook to learn some more!

I saw Dorrance Dance at Sadlers Wells in London back in 2018 and I was interested to hear Michelle talk about how she got into tap dance and about her life. Hailing from North Carolina, Michelle was a student of Gene Medler who would take his students to the St Louis Tap Festival and later Chicago, and formed the North Caroline Youth Tap Ensemble. She gave lots of good advice, including sharing some of the mistakes she made:

You should only ever be yourself.

I was so excited to hear from this beloved veteran and Aunt of the tap community! Dianne Walker grew up in Boston, MA and contracted Polio when she was small, so she basically had to learn to walk again. Once she could, she started dance lessons at Ethel Covan’s School for Ballet, but she liked tap, so she moved to the excellent Mildred Kennedy’s school (alumni include Sarah Reich, Dormeshia, Derick Grant, etc). Dianne had lots of performance opportunities in TV, theatre and film, but then her mother remarried and relocated the family to a remote airbase in California. She became a cheerleader as a teenager and ditched dancing for a while. It was only after she got married herself, and had children that she went to an event with her mother-in-law, where she met a guy who introduced her to the legendary Leon Collins! She tried to learn as much as she could…while working full-time at a psychiatric clinic, and her kids started to take classes too. One day Leon asked her to cover his class, which freaked her out, but his helpful advice was to “just share something that you know”, which how she teaches even now. Leon was her teacher and mentor, and she talked about how he created a bunch of routines for the purpose of teaching. (I recently learnt part of his routine #53!) She also talked how she was inspired by seeing Gregory Hines and Debbie Allen dance on TV in the 1980s, and how she got through an awkward audition for the show Black and Blue in New York City. It was such a wonderful chat, and I think the session overran by about an hour. The Tap & Tea ladies are hoping to get her back again for part 2!

You get to know a dancer through their dance

The team each talked a little about the Network and what they do, plus some of their most recent events and current research. I didn’t realise until part-way through that there would be separate breakout rooms to hear one person talk in more detail, and I didn’t really have time, so I’ll catch up on the recordings.

I took a drills class with Robin Passmore at the first TDFUK I attended in 2018 an absolutely loved it, so I was looking forward to this class. Robin is known for her clean footwork because she loves to work on drills! We drilled in our shuffles, crawls with paddles, crawls with shuffles, a cramp roll sequence, and we did some work on single and double wings – something I haven’t done enough of. Excellent!

American Tap Dance Foundation’s Tony Waag took us through a brief history of tap dance, from the lost Five Points neighbourhood of NYC and Master Juba, to blackface and minstrel shows, Jim Crow laws, Hollywood movies and the changing landscape of New York’s theatre district. He also covered a bit of his own story with Brenda Bufalino, Gregory Hines and Woodpeckers Studio. A very interesting session! We need a part 2.

This wasn’t part of TDFUK, but I managed to fit it in before the next event! (Although silly me, I went for a walk that was just a bit too long on a day of 3 almost back-to-back tap classes). Avalon of Old Kent Road tap company taught us a section of Bill ‘Bojangles’ Robinson’s King for a Day repertoire. It’s a great one to learn because it has a repetitive holding pattern (the double time step) with variations in-between. I really enjoyed this one and will definitely keep working on it! I left this class 5 minutes before the end because next I had:

This is something all tap dancers need to keep working on! If you want to execute some of the trickier steps and sounds, you MUST have LOOSE ANKLES. A shuffle shouldn’t come from the ankle or from throwing the knee, but from the top of the leg. Michelle got us to work on applying this to our shuffles, plus some trickier steps. It was SOOO helpful! I’m going to try and practise some of the other exercises she suggested over the weekend.

Guys, my feet were killing me and the top of my left leg was hurting by this point, so I sat this one out! (Thankfully there’s a recording).

We watched a video montage of the last 5 years of this amazing festival that usually takes place in Manchester, and then there was a Lifetime Achievement presentation to Dianne ‘Lady Di’ Walker, which was really lovely.

Hosted by MADD Rhythms’ Bril Barrett on Instagram, the London Tap Jam was full of music, chat and performances from people all over the world. Not only tap dancers, but a bass player and a drummer too!

I usually take the Monday off work after travelling and attending this amazing and positive festival in person, but I didn’t think I needed it with an online event….How wrong was I?!